Appears in Print as: 'You May Never Buy Another Car'


“With this shift, we believe the auto industry will go through disruptive change over the next 5-10 years and beyond.”
#Microsoft #Cadillac #Amazon

ReachNow is a company that now offers in Seattle both ride-hailing (think Lyft or Uber) and car sharing (think Zipcar or car2go) through a single app. Sometimes you want to be driven; sometimes you want to drive. You can get a car for a number of minutes or for as long as five days. You can be driven from A to B and beyond by a professional driver. 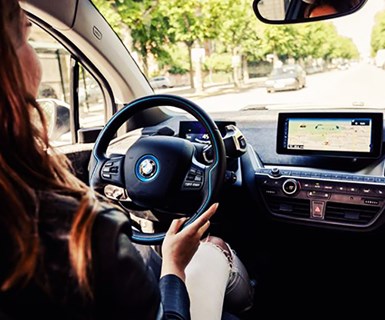 There needs to be one thing that is made clear about why this is a notable service: ReachNow is a BMW company. Consequently, the vehicles involved are BMWs—both the internal-combustion versions as well as the electric—and Minis. So when you’re getting something from ReachNow it isn’t likely to be a somewhat-clean-but-tired version of a random compact car that’s being driven by a person who has two phones working, looking for their next gig. A step up from the norm. But given that Seattle—where ReachNow is based, so the launch there makes sense—is the home to companies including Starbucks, Amazon and Microsoft, the BMW solution probably makes a whole lot of sense. (According to a recent Gallup survey of the demographics of Lyft and Uber users, when it came to the incomes of users of the services, 41% had incomes of $90,000 or more, the single highest cohort as regards income.)

“We are even beginning to see an early shift to a world where people own fewer personal cars.”

But what is perhaps more interesting than the services themselves is the explanation of why they’re doing what they’re doing provided by ReachNow’s Dr. Simon Broesamle, chief customer officer. He wrote in a blog post about the launch: “We are even beginning to see an early shift to a world where people own fewer personal cars. In fact, the Center for Automotive Research predicts that by 2021, one carsharing vehicle will replace 7.7 private vehicles in North America.”

Broesamle: “With this shift, we believe the auto industry will go through disruptive change over the next 5-10 years and beyond.”

Which is an understatement to the max. Broesamle and other people in this new mobility space recognize full well that it isn’t as applicable in all environments, such as in rural areas, but they also know that there is increasing urbanization and in that environment there needs to be alternatives.

That is, according to an April 2018 study by the Federal Highway Administration, which is part of the U.S. Department of Transportation, the average vehicle occupancy factor for cars is 1.7 and it is 1.0 for trucks. Which essentially means that there are a whole lot of vehicles out there without a whole lot of people in them. And the argument is that this is becoming increasingly unsustainable.

General Motors—which has historically been a company that builds vehicles that people buy—is also a player in this space of alternatives to car ownership, primarily through Maven. Maven provides vehicles that can be reserved via an app and used for as little as $8.00 per hour (plus tax). The service is available in 11 U.S. cities. Vehicles are strategically located in parking lots and garages. They are picked up and returned there.

Another service they’re offering is called “Gig,” which provides leases/rentals for people who want to drive for a ride-hailing or delivery service but need wheels. Maven makes it more affordable to make that happen. And most recently, Maven has launched a beta program that allows owners of GM vehicles that are 2015 models and newer to rent their cars to others, thereby generating income from what otherwise might be sitting idle. This is known as “peer-to-peer sharing.”

What will be the effect on the number of vehicles bought when peer-to-peer grows in popularity?

The point is that the auto industry is facing some unprecedented changes, changes that aren’t predicated on electrification or autonomy—although both will have consequences of their own—but simply on the use cases of vehicles.

Some people buy more vehicle than they need on a daily basis because there will be a few times throughout the year the additional capacity is required. While it has long been the case that rental is an alternative, it isn’t necessarily a convenient or economical one. So when it is time to transport the soccer team it could be securing a Chevy Tahoe through Maven. Perhaps the number of large crossovers that are sold will give way to more stylish sedans as a result. Need to get some mulch and you’re driving a Cadillac ATS? Maybe the peer-to-peer approach will get you into a Sierra pickup for the day.

The consequences of all of this cannot be underestimated.