This leading supplier of transmissions has decided that it will no longer develop units that can’t be deployed in hybrids. We find out why on “Autoline After Hours”
#FiatChryslerAutomobiles #ZF #AutolineAfterHours

On September 17 ZF Friedrichshafen announced that its 8-speed plug-in hybrid transmission will be used in the forthcoming Jeep Wrangler 4xe, a plug-in hybrid that features a 2.0-liter turbo and an engine mounted motor generator unit that replaces the conventional alternator and a second high-voltage motor generator in front of the transmission, where a torque converter would ordinarily reside. 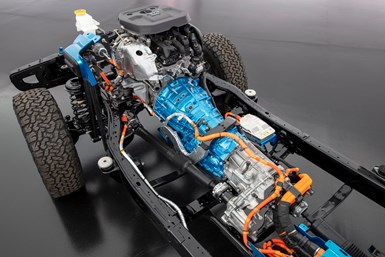 Under the skin of the Jeep 4xe. That blue-colored transmission is a ZF eight-speed that integrates an electric motor. (Image: Jeep)

Jeep projects that the Wrangler 4xe will be able to travel as many as 25 miles on electricity alone.

And it so happens that also on September 17 we had Dr. Jörg Trampler, Head of Engineering Center North America, Car Powertrain Technology for ZF, on “Autoline After Hours.”

Trampler and his colleagues concentrate on transmissions and it is interesting to note that ZF, which has a long history in providing vehicle transmissions for a wide range of vehicles throughout the world, announced earlier this year that it “will not invest in transmissions exclusively designed for internal combustion engine vehicles but will focus its development activities on flexible platform technologies for long-range plug-in hybrids and purely electric vehicles.” 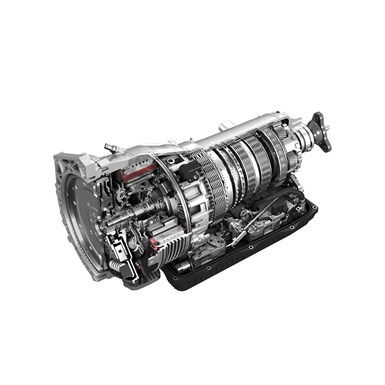 So on the show we have the opportunity to talk with Trampler about why ZF is so committed to electrification when it comes to its transmissions. A simple reason is that there is a big improvement when it comes to emissions. Think about it: those 25 miles that the Wrangler 4xe could be driving are miles that are not generating CO2 emissions.

It should go without saying that ZF has a wide range of customers beyond FCA, including companies like Porsche and BMW, which are committed to electrification, as there is that non-trivial consideration of emissions, while at the same time the beneficial boost that the electric motors can provide to the internal combustion engine.

ZF’s commitment is going to the extent that as of January 1, 2021, the division that Trampler works in, Car Powertrain Technology, is being combined with its E-Mobility division, an operation that develops products including e-axles, converters and other components.

Trampler talks with “Autoline’s” John McElroy, Bill Visnic of SAE International, and me on the show.

Then McElroy, Visnic and I discuss a number of other subjects including the Nikola-Hindenburg Research contretemps, Kia’s plans to have seven electric vehicles in 2027; LG Chem’s plan to create a subsidiary of its battery business called “LG Energy Solutions”;  Tesla not making it to the S&P 500; Ford’s electric F-150; and a whole lot more.

All of which you can watch on Autoline After Hours.