ZF Moves to the Front with Electric Parking Brakes

ZF has begun production of what the company claims is the first electronic parking brake (EPB) that can be mounted on a vehicle’s front axle.

The system will allow EPB to be used on subcompact and smaller cars, according to the supplier.

The technology, which enables design, performance and weight benefits, previously has been primarily limited to rear axle applications on large and midsize vehicles.

EPBs replace the hand lever or pedal and associated cables of a mechanical system with an electronically actuated motor on the brake caliper, which is activated by a small dashboard button or switch. 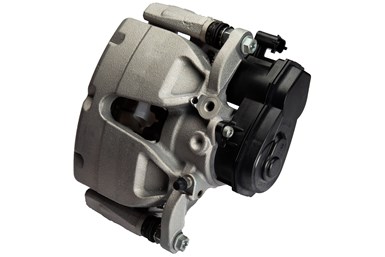 ZF says the front axle unit can be integrated into an existing stability control module with minimal modifications to the brake calipers. It can be used with any type of transmission or drive configuration in conjunction with either drum or disc brakes.

The design frees up interior space for other components—or simply provides a roomier environment for drivers and passengers.

In addition to serving as an emergency brake, the electronic system facilitates hill-start assists and can “significantly” enhance driving comfort during automatic stop-start functions, ZF says. The supplier adds that higher static load distribution on the front axle also enhances safety when parking on slippery slopes.

TRW, which ZF acquired in 2015, has supplied rear axle EPB systems to more than 75 million vehicles since pioneering the technology in 2001. 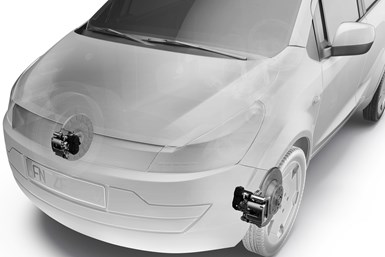 With no mechanical linkage, EPBs can reduce weight, while improving performance and packaging capabilities.

The company has been developing the front axle unit for nearly a decade. Part of the challenge was finding room for the electronic module in the crowded drivetrain of such small vehicles.

Over the years, ZF says it has continually refined the technology to improve packaging, reduce costs and enhance performance.

Series production was launched this year in China and South Korea for unnamed customers.