Appears in Print as: 'Grippers Will Help Further Human-Robot Collaboration'


Safety standards, third-party certifications, plug-and-play packages and new sensor technology for grippers designed for collaborative robots are making them safer, stronger and easier to use. 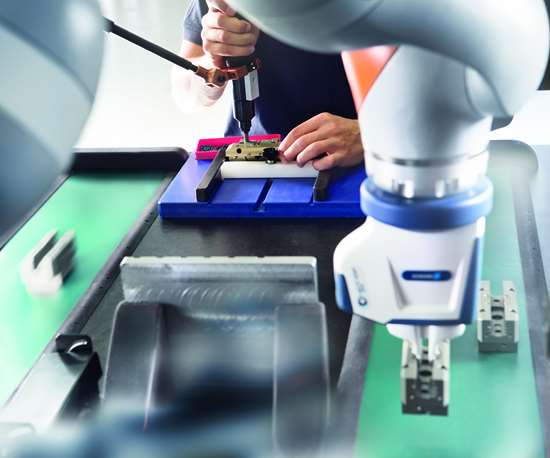 As collaborative applications for robots increase, grippers and how they influence safety are getting more consideration. Following this trend, Schunk has released the Co-act line of grippers, which are specifically designed for cobots.

Schunk’s Co-act grippers have a soft housing that eliminates sharp corners and pinch points, as well as limited gripping forces, in accordance with ISO regulations. A third party has also certified that these grippers comply with these regulations, taking some of the uncertainty out of the question of how safe they are for collaborative use.

Collaborative robots or “cobots” have an advantage in being able to work safely alongside humans. Some achieve this using sensor technology to slow and/or stop their motion when a person approaches them. Others feature built-in sensors that immediately stop cobot motion when they detect unexpected contact with an object or person. An increasing amount of attention is being paid to grippers and the role they play in cobot safety. According to Schunk Automation Group Manager Markus Walderich, these grippers are becoming safer, more trustworthy, stronger, more intelligent and easier to implement and use. He points to four trends that are shaping the design and development of cobot grippers:

Mr. Walderich says that while there is still uncertainty about the risks of human-robot collaboration in the market, ISO technical reports and standards that cover collaborative robots and grippers have become available to provide guidance for integrators and end users. ISO released the TS 15066 technical specification in 2016, which supplements previous safety requirements for collaborative robot systems. This report offers guidance to perform more sophisticated risk assessments for given applications. It also sets basic safety standards for cobot grippers, including the elimination of sharp corners and potential pinch points. It limits the gripping force to less than 140 Newtons so that if the gripper pinches someone, it will not cause injury. Schunk has developed a set of grippers, the Co-act line, which Mr. Walderich describes as “inherently safe” based on these standards. They have a soft housing with no sharp corners or pinch points, and their maximum gripping force is less than 140 Newtons.

Mr. Walderich adds that Schunk was involved with the committee for another ISO technical report that is currently in final review, TR 20218-2, which will provide additional guidelines specifically for end effectors on collaborative robots. “There’s still a lot of uncertainty in the market, and this ISO technical report that’s focused on collaborative applications and especially end effectors is hopefully going to take some uncertainty out of the market and build some more trust into these applications,” he says.

Traditionally, when customers want to automate with robots, an integrator helps them select and implement the system. This process can be costly and time-consuming. However, automation-equipment manufacturers are increasingly developing plug-and-play gripper packages that make it easier for customers to set up and use collaborative robots on their own, without the need for an integrator. These solutions already have the correct mechanical and electrical connections for the robot, and they are designed to be easy to script. Mr. Walderich says that plug-and-play packages can enable customers to have an easy-to-use collaborative robot system up and running in just a few hours.

Universal Robots’ URCaps platform is an example of a plug-and-play system. Gripper manufacturers can provide routines that make it easy for end users to integrate and control the gripper, so they do not need an integrator or a programmer to use script to program finger speed, force and precision.

Because ISO technical standards limit the gripping forces of collaborative grippers to 140 Newtons, the maximum payload for these grippers is only about 1.5 kilograms (3.3 pounds), limiting the applications for these grippers. Mr. Walderich says that at this level of gripping force, common tasks for the grippers include simple handling and assembly. Applications with higher payloads require traditional, non-collaborative grippers and a safety zone, such as an area scanner or cage, around the robot.

“Future grippers for collaborative applications will have a higher payload capacity and higher gripping forces than 140 Newtons, and therefore have to be more intelligent,” Mr. Walderich says. To that end, the company has developed a prototype gripper, the JL1, that includes technology to enable this. The JL1 has capacitive sensor and tactile sensor systems that can be used to differentiate between workpieces and humans. This prototype also includes other technologies that the company plans to incorporate into collaborative grippers in the future, including cameras, a touchscreen that can be used to change operative modes or teach the gripper, the ability to do both parallel and angular gripping, safe force limitation to ensure that the gripper does not inadvertently release the workpiece, and lights that provide users with optical feedback on the gripper’s state. “I think in general, there will be more intelligence in the end effector than we’ve ever seen before and having these integrative controllers and intelligent sensors inside the gripper is going to be a much bigger portion of the safety aspect of collaborative applications,” Mr. Walderich says.