Cases on the rise in South Carolina
#BMW

Production at the facility—BMW’s largest global source of SUV/crossover vehicles—hasn’t been affected, according to the carmaker. The plant, which reopened on May 4 after a 5-week lockdown, built 411,600 vehicles last year.

BMW says the 14 cases aren’t related to each other. All infected employees are in quarantine and the affected areas in the plant have been sanitized and deep-cleaned. 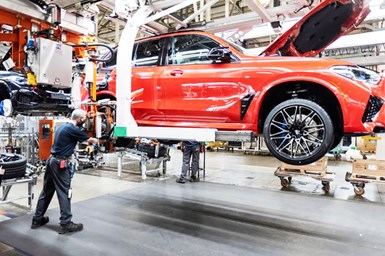 It isn’t clear when the employees became infected or where in the plant they worked.

The company says it has implemented numerous safety procedures to protect employees against the spread of the coronavirus. This includes strict case management and quarantine guidelines in adherence to health authorities and state and local governments.

"The health and safety of all persons working at BMW Manufacturing has always been our top priority," BMW said in a statement.

Local Cases on the Rise

The BMW workers are among a growing number of people who have tested positive in South Carolina as the state relaxes previous restrictions.

South Carolina Dept. of Health and Environmental Control reported 987 new COVID-19 cases on Thursday, a single-day high for the state.

The total number of cases in South Carolina now has surpassed 21,500. More than 620 people in the state have died from the virus.

Spartanburg is a key facility in BMW’s global manufacturing network.

The 7 million-sq-ft plant currently produces the carmaker’s X3, X4, X5, X6 and X7 crossover models. About 70% of the factory’s output is exported to 125 markets outside the U.S.

Last year, the plant’s exports were valued at about $9.6 billion. That’s the most of any U.S. auto plant, a distinction the Spartanburg facility has held for six straight years, according to BMW.

Earlier this month, the five millionth BMW built in the U.S. rolled off the line in Spartanburg. The facility was opened in 1994.