If big screen picture quality is your thing, then the 2021 Cadillac Escalade may be the ultimate living room on wheels.
#Audi #BMW #Tesla

If big screen picture quality is your thing, then the 2021 Cadillac Escalade may be the ultimate living room on wheels. The luxury SUV will feature the world’s first curved OLED display—a massive 38-incher that stretches across the dashboard. 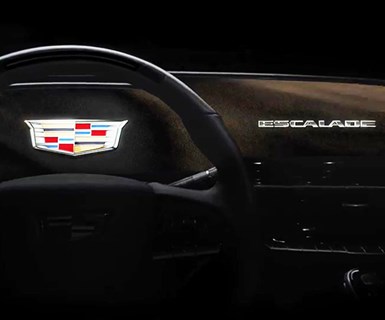 Cadillac says the Escalade system will have twice the pixel density of a 4K television. This translates into ultra-bold imagery, perfect blacks and the largest color range in the auto industry, the carmaker claims.

The first OLED (organic light-emitting diodes) TVs hit the market in 2013. Unlike conventional LED units, OLED screens don’t require a backlight. Instead, every pixel illuminates and colors itself. This allows them to be thinner, lighter and bendable—i.e., curved shapes.

Cadillac previewed the technology on the 2016 Escala concept car. It partnered with LG Electronics—the leader in OLED TVs—on that system.

Others have followed suit. This year’s Audi AI:ME concept features an OLED infotainment display that spans the entire dashboard, and BMW plans to offer a curved touchscreen on its upcoming iNext electric crossover vehicle. A handful of production models, including the Audi TT RS, already offer OLED taillights.

Size, of course, is relative. To wit: The outgoing Escalade features a 12.3-inch LCD instrument cluster paired with an 8-inch LCD touchscreen in the center console.

But Tesla upped the ante for everyone six years ago with a 17-inch unit in the Model S sedan. That started the trend toward bigger and bigger screens, which now is migrating to jumbo and gigantic. At the top of the list is Chinese automaker Byton’s upcoming M-Byte EV. It will have a 48-inch “shared experience” display, stretching from door to door, plus a tablet in the steering wheel hub.

For its part, Cadillac is giving the Escalade the red-carpet treatment. It plans to unveil the all-new model on Feb. 4 in Los Angeles, just days ahead of next year’s Oscars ceremonies.