This year’s Geneva auto show was one of the first major auto industry events that was canceled in the wake of the coronavirus pandemic, with organizers pulling the plug less than a week before it was due start in early March.

On Monday, the foundation for the “Salon International de l’Automobile” announced there won’t be a 2021 show either.

Several factors conspired in the decision to cancel the 2021 event, including ongoing health concerns about COVID-19, lack of exhibitor interest and the financial consequences of losing this year’s show. 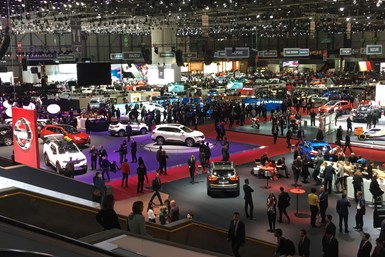 The annual exhibition attracted more than 600,000 visitors in 2019, making it the largest public event in Switzerland. It generates more than $200 million in income for Geneva.

But the conditions of the loan stipulated that a show has to be held next year and a minimum repayment of 1 million francs be made by next June, terms which the foundation rejected.

In a poll of potential exhibitors, a majority indicated they probably wouldn’t participate if a 2021 show were held.

Concerned that a low turnout could irreparably damage the show—or end it outright—organizers opted to sit next year out and wait until 2022 to hold the next show.

But the foundation still needs money to repay exhibitors that had prepaid for this year’s event.

As a possible solution, the group aims to sell the Geneva show to Palexpo SA, the organization that operates the convention center where the event is held. According to media reports, the Geneva auto show generates about one-third of the value of Palexpo.

No timetable was provided for the proposed sale.

Industry participation at global auto shows has been on the decline for years, with automakers increasingly opting to hold private events and/or online unveilings to save money and better target prospective customers.

At least 22 brands skipped the biennial Frankfurt auto show last September, and attendance fell 31% from 2017. Most other shows have suffered similar fates.

The Detroit auto show had hoped to jumpstart interest this year by moving the event from January to June and changing the format to include more interactive displays, entertainment and outdoor venues. It was canceled due to the coronavirus and rescheduled for June 2021.

Recent spikes in COVID cases and concerns about a the potential of an even more severe second wave in the autumn make large-scale gatherings in confined spaces an even tougher sell.

As of now, the Los Angeles auto show is still scheduled in late November. But the date seems tenuous at best, considering California already is reversing the easing of restrictions at restaurants and other public places that had just reopened.