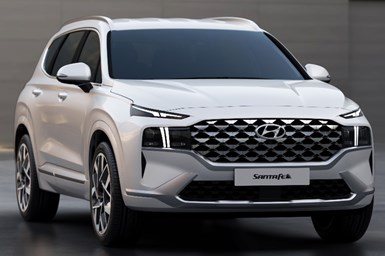 The 2021 model rides on a new platform, which also carries the Sonata sedan.

But Hyundai says the vehicle still is part of the Santa Fe’s current fourth-generation lineup, which debuted just two years ago.

The quick update reflects how important crossovers have become. Last year, SUV/crossovers accounted for 48.8% of the U.S. market and they’re on pace to top the 50% mark this year.

That makes staying ahead of the competition more important than ever.

Hyundai also is launching an all-new version of its smaller Tucson crossover this year, while VW is giving its high-volume Tiguan a major mid-cycle makeover. And Ford plans to keep its upcoming Mustang Mach-E fresh with over-the-air software updates.

The Santa Fe’s new architecture features a lower center of gravity and other changes that the carmaker claims will provide improved performance, efficiency and safety. NVH also is said to be more refined.

The exterior is highlighted by a wider grille, which now spans the full width of the crossover, with unique mesh patterns for different trim levels. Integrated headlights are teamed with redesigned T-shaped LED daytime running lights.

Housed within a new skid plate, the clamped shape of the lower air intake is meant to accentuate the wider stance. Vertically orientated side vents, meanwhile, bolster the Santa Fe’s “upright and robust impression.” 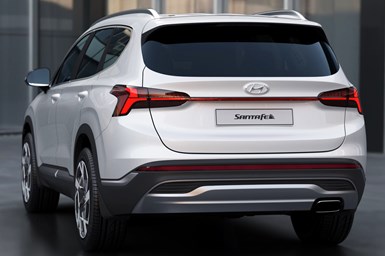 Character lines run the length of the vehicle, connecting the DRLs to the taillights. The rear features a slim light bar, wide reflector and reworked skid plate to create a layered appearance.

Other goodies include 20-inch wheels and more pronounced wheel arches.

Hyundai describes the makeover as a “rugged yet refined look that SUV customers want.”

The passenger cabin has been redesigned to improve comfort and convenience, according to the carmaker. This includes ample use of soft-touch materials throughout the interior.

Updates include a redesigned dashboard and a high-sitting floating center console—with more storage space. A standard 10.25-inch touchscreen replaces the previous 7-inch unit, while a new shift-by-wire system enables the use of a push-button system instead of a rotary gear selector.

Powertrain options will include hybrid and plug-in hybrid options for the first time in the Santa Fe. The plug-in unit is expected to be the same system used in the Kia Sorrento.

With the additions, Hyundai says electrified variants will be offered its entire SUV/crossover lineup.