Earlier this month, Mercedes-Benz detailed the new MBUX user interface that will be introduced on the 2021 S-Class sedan. 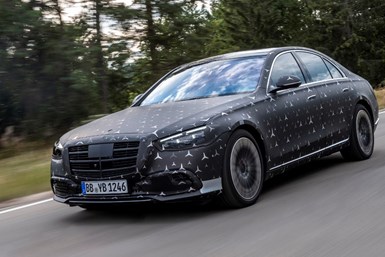 Now it’s time to take a look at some of the car’s safety features.

As you might expect, the next-generation model is chock-full of advanced technologies and other goodies.

Here are some highlights:

The new S-Class gets an enhanced version of Mercedes’ E-Active Body Control technology, which adds hydropneumatics to the air suspension.

Featuring five multi-core processors and more than 20 sensors, the optional 48-volt chassis system monitors driving variables at a rate of 1,000 times per second and adjusts the suspension accordingly to improve ride and handling characteristics. Mercedes debuted the technology on its GLE and GLS crossover vehicles.

In Drive mode, a camera scans the road for upcoming bumps and other variances. Damping at each wheel then is automatically adjusted to counter body roll, pitch and lift.

Curve mode allows the car to actively lean into bends to help smooth the ride for occupants, according to the carmaker. 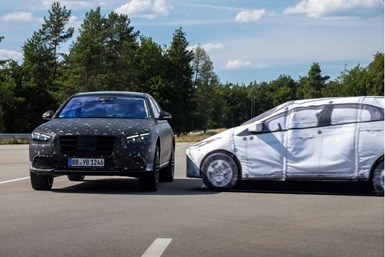 Another part of the body control system is a new feature that detects an impending side-impact and raises the body as much as 3 inches just prior to the collision. This reduces the loads on the door structures and limits deformation of the passenger compartment.

Audi uses a similar system in the A8 sedan.

The 2021 S-Class is the first Mercedes model to offer all-wheel steering, which the carmaker claims will allow the full-size sedan to maneuver like a compact car.

Like similar systems offered by Bentley, Ferrari, Porsche and others, Mercedes’ system operates the rear wheels in the same direction as the front wheels at high speeds (37 mph and above) and in the opposite direction at low speeds. This enhances stability and maneuverability, respectively.

Mercedes will offer two variants: one that allows a rear steering angle as great as 4.5° and another that can turn 10°. The latter is especially useful in parking maneuvers, reducing the car’s turning radius by as much as 7 ft. It also includes a special snow chain mode that can be activated by the driver.

Mercedes claims the S-Class will be the first vehicle in the world to offer frontal airbags for rear seat passengers.

Housed in the backs of the front seats, the optional system uses a unique tubular, wing-shaped design that inflates the bags with less force and deploys into a large tent-like structure, according to the carmaker. Mercedes says the system gives way to obstacles and helps catch out-of-position passengers.

The airbags work in conjunction with the S-Class' inflatable seatbelts. In addition, buyers can upgrade to illuminated designer belt buckles that make the safety restraints easier to fasten at night.

The S-Class also adds a center airbag that deploys between the driver and front seat passenger during side collisions to reduce the risk of them colliding with each other.

Mercedes also has made several enhancements to aid parking maneuvers.

This includes an active parking assist system with 12 ultrasonic sensors and simplified user interfaces with touch control. The system also benefits from the 4-wheel steering technology and emergency braking function while reversing.

In addition, an optional 360° vision system combines the images of four cameras into a 3D image that can be viewed—with zoom and rotation functions—on the center display. Mercedes says the feature also can identify and access more potential parking spaces.

After the vehicle is parked, the active blind spot assist feature warns occupants about exiting the vehicle if another car or cyclist is passing on the side.