The Washington, D.C., auto show has been held in the city every year since the end of World War II in the 1940s.

And the streak will continue next year…with some modifications.

For starters, organizers are pushing the show back two months, from late January to late March. And they vow to take special precautions to ensure public safety to help protect against the spread of COVID-19.

Esssentially all in-person industry events have been canceled or changed to virtual meetings in the wake of the coronavirus.

Last month, the CES electronics show announced plans to switch to an online format for next year’s event in early January. The scheduling logistics for the massive show made it difficult to change the dates on the fly. 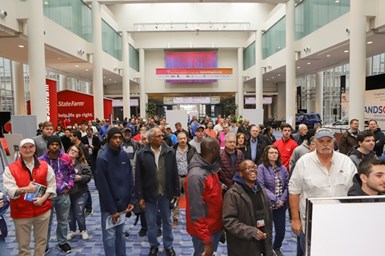 The D.C. auto show, which is touted as the largest indoor event in the nation’s capital, has more flexibility. But there still will be plenty of challenges.

“This pandemic has created a lot of uncertainty and upheaval for everyone, and we are working diligently to make the 2021 show both as safe and exciting as it can be," says show CEO John O'Donnell.

He adds: "Our top priority is to ensure the safety of all involved in this show, and we believe strongly that a two-month delay will better allow us to produce the type of well-rounded and immersive show that our attendees are accustomed to."

The new cleaning and health measures include:

Next year's show is set to start on Thursday, March 25, with an industry media day. This will include public policy and industry-focused events. But the previously scheduled MobilityTalks International conference has been canceled.

The show will open to the public on March 26 and will run through Sunday, April 4. It will be held at its usual location, the Walter E. Washington Convention Center.

Thus far, about 20 car brands have reserved display spaces for the 2021 show, according to organizers. This compares with nearly three dozen participants at this year’s show, which was held in late January prior to the widespread outbreak of the pandemic in the U.S.