3 Keys to Creating a Hydrogen Society

Cost is a biggie, plus safety and consumer acceptance
#Hyundai #Carbon

As you might imagine, the three-year-old Hydrogen Council consortium is all about developing and promoting the ubiquitous chemical as an alternative energy source.

The problem? Despite being the most abundant substance in the universe, hydrogen has been slow to catch on in the auto industry—in the form of fuel cell-powered vehicles—and other energy applications.

But the group isn’t giving up. At its third annual conference, held this week in Paris, Hydrogen Council co-chair Euisun Chung, who is better known as Hyundai Group’s executive vice chairman, listed three keys to achieving hydrogen domination… or at least making it more relevant.

His action items are:

Chung elaborated on the plan in a recent interview.

In conjunction with the conference, the council released an 88-page report entitled “A Path to Hydrogen Competitiveness.” It’s conclusion: Manufacturing and other costs can be cut in half by 2030… if $70 billion is invested to further develop the technology and supporting infrastructure. 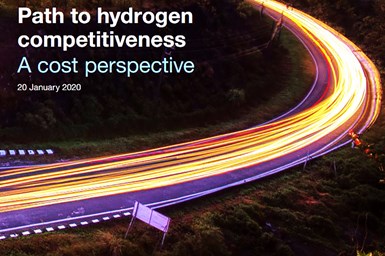 If this sounds like a lot, it is. But the authors point out that $70 billion is less than 5% of the annual global spending on all types of energy. By comparison, support provided to renewables in Germany alone totaled about $30 billion last year.

Halving costs would go along way to making hydrogen competitive with other low-carbon alternatives and, in some cases, even conventional options. The report lists opportunities across the value chain—production, storage, distribution and applications—including 22 specific use cases. But getting there will require:

Chung also stressed the need to establish a comprehensive safety management system throughout the entire hydrogen value chain in order to convince the general public that hydrogen is completely reliable in terms of safety.

As with most great plans, the proof in hydrogen’s pudding comes down to acceptance. To this end, Chung says the council and other constituents must become more active advocates… no exceptions.

This means working closely with governments and policymakers to develop the necessary resources and promote the benefits of hydrogen. One idea: creating pilot zones that use hydrogen to power all major energy needs, including electricity, heating and cooling, and transportation.

Check out the Hydrogen Council’s web site for more information and a full list of its members.