The titanium tailpipe cover used on some variants of the Bugatti Chiron is the first use of a 3D-printed metal for a visible part in a street-approved vehicle, the supercar-maker claims. 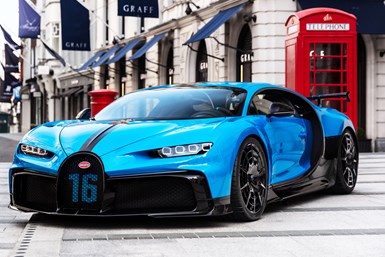 Weighing about 4 lbs, including the grille and bracket, the 3D-printed part is 39% lighter than the cover used on the base Chiron. It also has greater heat resistant properties, with the capability to withstand temperatures as high as 1,200°F.

Bugatti began using 3D-printed parts on the Chiron in 2018 with a titanium brake caliper. The Volkswagen Group ultra-luxury brand claims the front-axle application is the largest brake caliper in a production vehicle and the largest 3D-printed “functional” part made from titanium.

Weighing just over 6 lbs, the unit is about 40% lighter than the Chiron’s previous cast aluminum-based brake caliper.

Bugatti also is using 3D-printed parts in a trio of special-edition models, including the Centodieci, Divo and La Voiture Noire. The Divo application features a rear grille with lightweight “fins” that illuminate.

Four 400-watt lasers are used to print the trim cover, which in some cases encompasses four tailpipes. The unit is fused together from about 4,200 stacked layers of titanium powder, constructing walls with varying thicknesses—down to just 0.4 mm at its thinnest point. 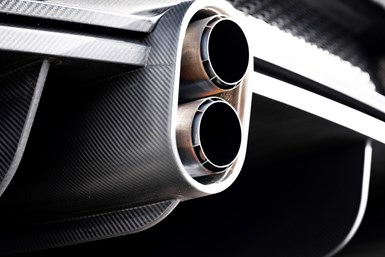 The minimalist design is made possible by a lattice structure in which the cavity is filled with numerous filigree struts, according to Bugatti. The walls support each other during the construction process.

Extra thickness is used at the point nearest the exhaust to boost thermal insulation against the high temperatures generated by the Chiron’s 1,480-hp, quad-turbo 8.0-liter W-16 engine. Bugatti says conventional aluminum would melt under such conditions.

3D printing also allows for greater design flexibility. “It is possible to create very finely wrought, complex forms which would tear if made using other techniques such as forging or forming,” explains Nils Weimann, Bugatti’s head of body development. In addition, he notes, there are no tooling costs, and individual adjustments to part shapes can be made relatively easily.

The Chiron’s 3D-printed cover also can be made from Inconel 718, which typically is used in aerospace applications and turbines. Coupled with a rear diffuser, the new exhaust configuration also helps generate negative lift to reduce drag.

It takes several days to 3D-print a cover. After a build is completed, Bugatti scans the component in a computer tomograph to detect any quality defects. The part is then finely coated with corundum, and a high-temperature black-ceramic paint finish is added.