The teams were selected by the state of Michigan through a Mobility Challenge announced in May by Gov. Gretchen Whitmer in conjunction with the show, which is moving from its traditional January date. Each group will provide rides in downtown Detroit June 6-21, which begins with the auto show’s media and industry preview days and continues through all public days. 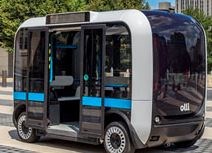 In addition to allowing riders to experience self-driving shuttles and robo-taxis, the providers will showcase features that connect vehicles with their surroundings, cater to riders with physical challenges and demonstrate advanced manufacturing methods.