A Look at What Could Have Been: Dyson’s Canceled EV

James Dyson lost £500 million ($610 million) of his own money last year when he pulled the plug on the electric vehicle his company was developing.

He can afford it. With an estimated net worth of £16.2 billion ($19.8 billion), Dyson is the richest person in Britain, according to a list compiled by the Sunday Times.

He’s also someone who is willing to take risks, especially when it comes to innovative products. Dyson, who invented the bagless vacuum cleaner and founded the eponymous company to build it in 1991, reportedly has invested as much as £7 million ($8.5 million) per week into research and development in recent years.

Not all of the inventions come to fruition. But it isn’t from lack of effort. 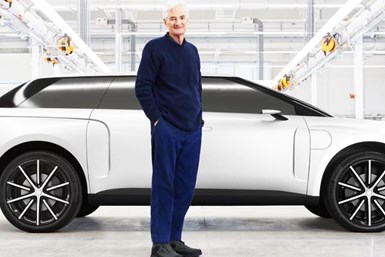 Despite boasting of leading-edge technology, Dyson says he couldn’t make a business case for the vehicle. Just to breakeven, he estimates, the car would have required a price tag of about £150,000 ($183,000).

Part of the problem, Dyson tells the Times, is that competitors such as Audi, BMW and Mercedes-Benz are selling EVs at a loss to gain fuel economy/emissions credits to offset their existing gasoline- and diesel-powered models. Dyson doesn’t have a profitable conventional fleet to underwrite its EV business.

Dyson still stands behind the N526’s underlying technology, which he discussed in detail with the Times.

Measuring 197 inches long, 79 inches wide and 67 inches tall, the seven-seat Dyson EV is about the  size of a Tesla Model X crossover. Its 5,700-lb curb weight also is nearly identical to the stretched version of the Model X.

Its driving range was estimated at 600 miles, which would have nearly doubled that of the long-range Model X’s capabilities (314 miles on the European WLTP cycle).

But he also offered a more sanguine assessment: “Ours is a life of risk and of failure. We try things and they fail.”

There also were positives to come out of the program. Dyson continues to develop the solid-state battery technology, robotics and advanced manufacturing systems related to the EV. The company also has reassigned most of the 500 engineers hired to develop the vehicle.

Dyson didn’t completely rule out taking another run at an EV. But he says the commercial circumstances would have to be right next time around.

Regardless of his next endeavor, here’s hoping that Dyson (and other innovators) continue to push the envelope and take the necessary risks to drive future breakthroughs.