But such perception systems are limited by a lack of depth, according to researchers at Carnegie Mellon University (CMU) and Argo AI. They contend that current systems don’t properly take into account the empty space between the sensor and object it’s detecting or how deep an object is and what’s behind it.

The problem is that data collected from the sensors doesn’t result in fully fleshed out 3D images. 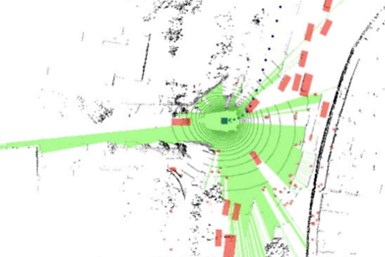 Instead, the sensors create so-called 2.5D point cloud representations, which don’t show what an object may be obstructing, the researchers note. This could cause false readings, objects to be misclassified or missed entirely.

"Perception systems need to know their unknowns," says Peiyun Hu, a Ph.D. student in CMU’s Robotics Institute and one of the authors of the study.

Previous systems may not have incorporated the additional data due to concerns about computation time. But Hu says this isn’t a problem, noting that the new calculations can be done in one-fourth the time of a typical lidar sweep (24 milliseconds vs. 100 milliseconds).

But it’s usually worth taking note when the work comes from Carnegie Mellon. Researchers at the university pioneered AI in the early 1960s and have long been a leader in autonomous vehicles, dating back to the DARPA Urban Challenge races in the mid-2000s.

The university has been working with Argo AI for several years. Both are based in Pittsburgh.

The latest study is being presented this week in conjunction with the Computer Vision and Pattern Recognition virtual conference.