Fiat Chrysler Automobiles NV’s Alfa Romeo set a new record for a crossover/SUV at Germany’s legendary Nurburgring with a time of 7 minutes and 52 seconds in the high-performance Stelvio Quadrifoglio.
#HP #Fiat #FiatChryslerAutomobiles 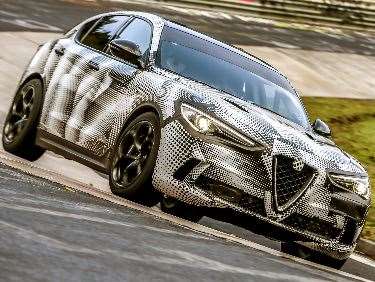 Fiat Chrysler Automobiles NV’s Alfa Romeo set a new record for a crossover/SUV at Germany’s legendary Nurburgring with a time of 7 minutes and 52 seconds in the high-performance Stelvio Quadrifoglio.

The all-wheel-drive Stelvio’s run bested the previous record—set by a Porsche Cayenne Turbo S in 2014—by a full eight seconds. A video of the Stelvio’s performance can be viewed here.

Earlier this year, Alfa Romeo set the ‘Ring record for a sedan with the Giulia Quadrifoglio completing the grueling 12.9-mile Nurburgring Nordschleife circuit in just 7 minutes 32 seconds. Alfa driver Fabio Francia piloted the Stelvio and Giulia on their record runs.

In addition to sharing a platform, the Quadrifoglio variants of the Stelvio and Giulia are powered by a 2.9-liter 24-valve twin-turbo V-6 engine that generates 505 hp and 443 lb.-ft. of torque. The engine propels the Stelvio Quad from zero to 60 mph in in 3.9 seconds.

The Stelvio Quadrifoglio also features a class-exclusive carbon fiber driveshaft and the most direct steering available, according to Alfa. Other goodies include torque vectoring, a specially tuned adaptive suspension, cylinder deactivation and four driving modes.

Alfa launched the Stelvio earlier this year in Europe. The 2018 model will be introduced in the U.S. next month.