The average American regardless of age covered 8,855 miles by car last year, up 4.5% from 2013, according to Sivak Applied Research.
#oddities 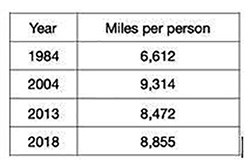 SAR President Michael Sivak offers no reason for the changes over the years. The calculations combine population data from ProQuest with statistics from the Federal Highway Administration about total miles driven by all light-duty vehicles.

Sivak previously was director of Sustainable Worldwide Transportation at the University of Michigan.