The co-founders of California electric vehicle startup Aptera Motors, which went bankrupt in 2011, are relaunching the company with plans for a lightweight, three-wheeler that can travel 1,000 miles per charge.

The co-founders of California electric vehicle startup Aptera Motors, which went bankrupt in 2011, have reformed the company and aim to launch a lightweight, three-wheeler that can travel 1,000 miles per charge.

Chris Anthony and Steve Fambro, who co-founded Aptera with Michael Johnson in 2006, have reacquired the company’s intellectual property that was purchased by China’s Zap Jonway. Anthony and Fambro are co-CEOs of the new venture, with Johnson serving as a consultant. 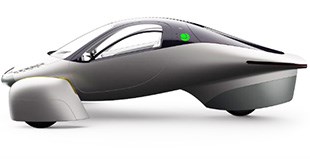 The partners hope to raise $2.5 million from a mix of traditional investors and crowdsourcing. Money collected will go toward building three prototypes of the new design, which Aptera claims will be the world’s most efficient EV.

Based on the original 2e prototype, the new two-seater will feature three in-wheel 50-kW electric motors. A range of battery options are planned, topping out with a 100-kWh unit tied to the 1,000-mile bogey.

The lightweight composite structure holds the car’s weight to about 1,800 lbs. Additive manufacturing processes will be used to build some of the components.