Maybe the cab line will be a little shorter. . .
#Hyundai #BMW #Aptiv

Those arriving this week at McCarran International Airport in Las Vegas for CES encountered cab lines that were longer than those typically generated by those who are seeking fortune, if not fame (or a seat at the table at the WPT).

They also may have noticed something else:

BMWs with the Aptiv logo prominently painted on the body sides and hood. 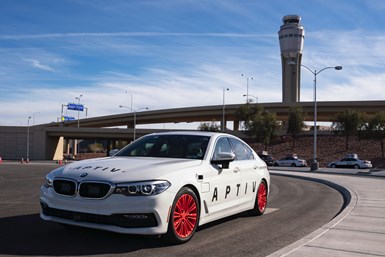 Aptiv achieved first-ever access to pick up and deliver predetermined people at the airport. The developer of autonomous driving tech has already been testing its self-driving vehicles on the streets of Las Vegas. There are over 3,400 destinations that are programmed into the vehicles’ system, everything from casinos to the Las Vegas Convention Center.

In case you’re wondering, this is not—to use an obvious cheap pun—a gamble for the passengers, as there is a safety driver in the car.

According to Karl Iagnemma, president of Aptiv Autonomous Mobility, “Data has shown that a significant portion of ride-hailing demand comes from passengers traveling to and from airports.”

Which is sort of like saying the odds are in the house’s favor.

Still, one of the biggest applications for Level 4 autonomy—and Aptiv plans to have a production-ready autonomous driving system available by 2022—is the robotaxi fleet, so it is beginning to get some deep knowledge of those requirements.

One more thing: Aptiv and Hyundai Motor Group announced the formation of a joint venture last September, and when it closes, the jv will take control of the Aptiv operations in Las Vegas.

Here’s guessing the 5 Series gives way to the Sonata.