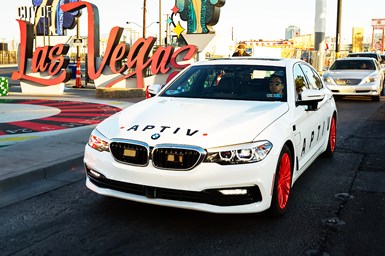 When Aptiv and Lyft began testing robo-taxis at CES in Las Vegas in early 2018, the limited pilot program was supposed to last only about a week.

Following initial positive feedback, the service was expanded a few months later to allow any Lyft user in the city to request a ride in a self-driving car.

This week the companies announced they had surpassed 100,000 autonomous rides, which they boast is the most ever for a for-pay ride-sharing service.

But it’s more than just bragging rights. The partners say they’ve gathered invaluable data and customer feedback during the tests.

The partnership allows Lyft and Aptiv to focus on what they do best: customer service and automated vehicle technology, respectively. Aptiv also operates a command and technical center in Las Vegas to monitor and service the vehicles.

The service’s fleet of specially equipped BMW 5 Series sedans connect with more than 3,400 destinations throughout Las Vegas, including the airport.

Two Aptiv representatives tag along on the rides. One serves as a backup driver, while the other tracks data and answers passenger questions. Both are required to go through several weeks of training—plus regular refresher courses—and are debriefed after their shifts.

The vehicles aren’t permitted to drive in autonomous mode on highways or on private property. This means the safety driver must take control in parking lots and designated pick-up/drop-off areas for hotels and casinos.

Many initial riders indicated they signed up for the service just to see what it was like to ride in an autonomous vehicle. But they often had an “aha moment” once they experienced the technology as a passenger, according to Aptiv and Lyft.

Based on the feedback, the companies say customers are “eager” for broader availability of robo-taxis. They plan to use the Vegas deployment as a blueprint to offer such services in other areas but didn’t offer a timeline or other details.

Aptiv and Lyft also have separate partnerships with several other companies.