First application will be in the 2021 Bronco
#ArcelorMittal

Steel giant ArcelorMittal says its new Fortiform 980 GI third-generation advanced high-strength steel will debut in structural components on the upcoming Ford Bronco SUV, which is due to launch next spring.

Emerging Gen3 steels, which can be formed by conventional cold-stamping processes, blend high tensile strengths with enhanced ductility. This enables additional weight savings and improved formability in applications with more complex shapes, according to the supplier.

For the Bronco, ArcelorMittal says the use of Fortiform 980 helped Ford meet its goal to cut total vehicle weight by 10% while maintaining performance properties. 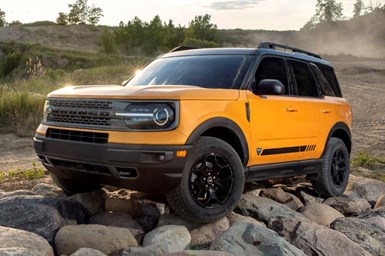 ArcelorMittal claims no other steel grade has been tested as much as Fortiform 980 because it’s so new and unique.

“We enlisted the coating experts on my team along with product design experts,” says Jayanth Chintamani, director, automotive product research. “We then made sure that the target-critical processing parameters during various stages of industrial manufacturing were met with support from r&d process experts.”

The new steel will be produced by ArcelorMittal’s joint venture with Nippon Steel & Sumitomo Metal in Calvert, Ala. The partners, which acquired the facility from Thyssenkrupp in 2014, are in the process of installing new equipment and upgrading overall capabilities.

In addition to the Bronco program, ArcelorMittal says it’s in talks with Ford and several other carmakers on potential applications for using Fortiform 980 on future vehicles.