Japan’s Aspark Co. has unveiled the production version of its all-electric Owl hypercar that will debut in the second quarter of 2020 with a base price of $3.2 million.
#Carbon #HP #asia

Japan’s Aspark Co. has unveiled the production version of the all-electric Owl hypercar it plans to launch in the second quarter of 2020 at a base price of €2.9 million ($3.2 million). 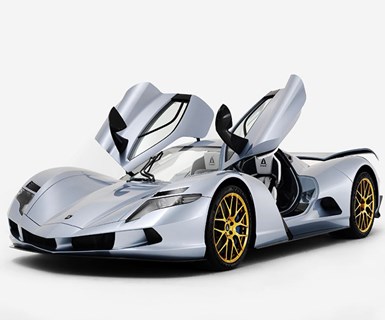 The updated EV features styling tweaks, aerodynamic enhancements and even more extreme performance capabilities than the 2017 concept model. Last year a prototype of the Owl clocked a zero-to-60-mph time of 1.9 seconds.

Power is supplied by four electric motors that generate a combined 2,012 hp and 1,475 lb-ft of torque. Aspark says the electric motors rotate at an industry-best 15,000 rpm.

A 64-kWh lithium-ion battery provides an estimated range of 280 miles on the European test cycle and can be fully replenished in 80 minutes via a 44-kW charger. Aspark says a larger battery with a longer range could be offered later.

Sitting on a 108-inch wheelbase, the Owl stretches to 189 inches from bumper to bumper and is 76 inches wide. The car’s 39-inch height is said to be the lowest in the world for a production EV.

Carbon-fiber-reinforced plastic is used throughout the body and monocoque chassis to reduce weight. A large rear spoiler is deployed at speeds greater than 93 mph.

In addition to the active rear wing, other changes from the concept car include redesigned windows, a more upscale interior and replacing the side mirrors with cameras and interior displays.

The cars will be built in Turin by Manifattura Automobili Torino. Aspark says it has sold 15 of the planned 50-unit production run. The company also is planning two other hypercars, one smaller and one larger than the Owl.