Aston Martin says its new hybrid V-6 system will be the most powerful drivetrain in the company’s history.

That distinction currently goes to the hybrid unit that powers the flagship Valkyrie, which cranks out 1,160 hp and 663 lb-ft of torque. The bulk of the output comes from the car’s naturally aspirated Cosworth 6.5-liter V-12. 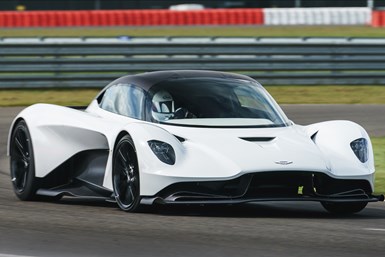 The twin-turbocharged 3.0-liter V-6 will bow in the mid-engine Valhalla supercar in 2022, followed by the Vanquish a year later.

It will be mated with a range of hybrid-electric units—including a plug-in variant—that are being developed in parallel with the engine.

The compact design features a dry sump and a “hot V” structure in which the turbos are packaged between the cylinder heads. Aston Martin says the engine will weigh less than 200 kg (441 lbs).

The engine already has undergone extensive dynamometer testing and will meet upcoming Euro 7 emissions regulations, according to the carmaker. 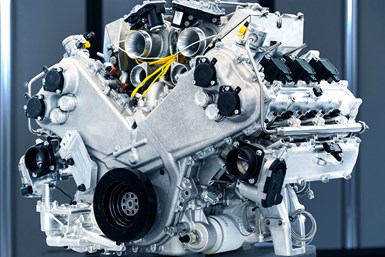 The all-new V-6 is the first engine Aston Martin has developed entirely in-house since 1968. It’s codenamed TM01 in honor of Tadek Marek, the British luxury marque's famed powertrain engineer of the 1950s and ’60s.

The Valhalla will share some styling and technology with the Valkyrie, both of which were developed in partnership with Red Bull’s Formula One team. Aston Martin plans to build 500 Valhallas, whose price will start at about $1 million. That’s less than half the cost of the pricey Valkyrie.