The rugged, futuristic-looking concept features a large glass greenhouse that extends into the roof, midway down the doors and to the traditional front grille area. The “invisible” glass beltline, which is the same height as an occupant’s armrest, will be used in a production vehicle within five years, Audi design chief Marc Lichte tell Autocar. 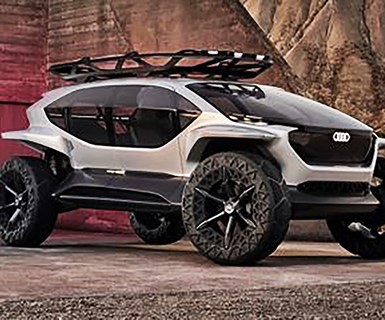 The glass design provides greater visibility for drivers as they navigate harsh terrain, the carmaker notes.

Audi says the concept model has a 13.4-inch ground clearance—which is more than the Jeep Wrangler Rubicon and Land Rover Defender—allowing it to drive through 1.6 ft of water.

The tires are pushed to the edges without any bumpers to enhance approach and departure angles. Tire pressure can be adjusted while driving to bolster traction or comfort.

Power comes from four electric motors—one at each wheel—that produce a combined 435 hp and 738 lb-ft of torque. The layout enables torque vectoring and eliminates the need for differentials and other conventional drivetrain components that add weight and friction losses.

Audi estimates that a large lithium-ion battery could provide a 500-km (311-mile) driving range on roads or “easy off-road” terrain and as much as 250 km (155 miles) over hilly, rough conditions. Top speed is limited to about 80 mph. 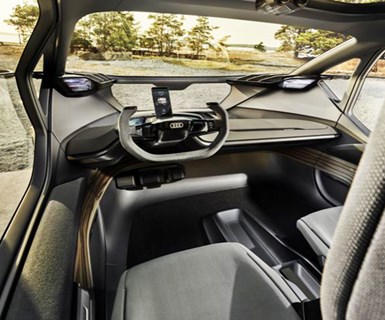 Built with a mixture of aluminum, carbon fiber and high-strength steel, the AI:Trail weighs less than 3,900 lbs. The concept’s squat design is about the same length of a compact Q3 SUV, while its width is closer to that of the larger Q7.

In place of conventional headlights, five drones mounted on the roof rack are used to light the way. The drones can be detached to fly ahead and better illuminate upcoming terrain.

Vehicle controls and displays are integrated into a driver’s smartphone, which can be docked onto the steering column. This allows the dashboard to be lowered to further increase visibility.