Not everyone likes green—unless it is when a stop light turns from red. . .
#Audi #HP

Even though Audi promoted its Green Cred with its Maisie Williams 2020 Super Bowl ad showing her singing “Let It Go” while being surrounded by vehicles the exhaust from which was visibly noxious, and even though the Audi e-tron Sportback she’s driving is an exceedingly nice vehicle that doesn’t have a tailpipe because it is an electric vehicle, something gives us pause about Audi’s approach to the market.

It announced that it is offering the SQ7 SUV in the U.S. for the first time. 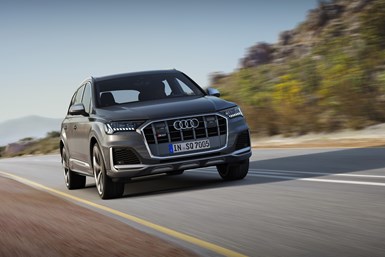 You’ll let it go when you get on the accelerator: Audi SQ7 (Euro model shown) Image: Audi

Seems like Audi believes that not everyone is necessarily interested in things that don’t have a throaty growl, just a relaxing hum.