By 2050, Volkswagen Group aims to be a “net neutral” source of carbon dioxide. To achieve the ambitious goal, the carmaker is implementing various vehicle—hybrid and electric—and manufacturing technologies.

But this won’t be enough. At least not until the company is able to completely eliminate tailpipe emissions and those generated via the production process, including the supply chain, and end-of-life recycling.

In the meantime, VW is working on ways to offset any greenhouse gas emissions it does produce. This includes partnering with startups on emerging sequestration technologies that the carmaker can apply as environmental credits.

To this end, VW’s Audi unit is teaming up with Climeworks on what’s billed as the largest direct air capture (DAC) and storage operations. 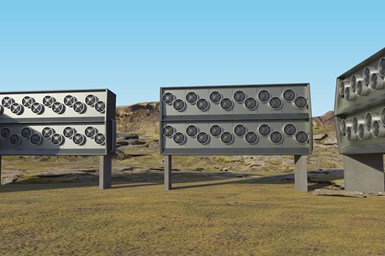 The facility, which is located in Iceland, uses a fan to draw ambient air into collection devices. CO2 is then captured via selective filter materials.

Once the filters are full, the collector is closed and temperatures inside the machine are increased to 100°C by using waste heat from the nearby Hellisheioi geothermal plant. This enable CO2 molecules to be extracted and separated, while the purified air is pumped back into the surrounding atmosphere.

Water from the power plant then flows through the DAC facility and transports the CO2 molecules about 6,600 ft underground. Over the course of several years, the molecules react through natural mineralization processes with the basalt rock and are converted to carbonates. The used water is recycled back to the geothermal plant.

The new facility is expected to filter 4,000 metric tons of CO2 per year, of which 90% will be permanently stored underground.

Under the partnership, one-quarter of the output will be credited to Audi. This is equivalent to the CO2 adsorption rate of 80,000 trees via natural photosynthesis, according to the carmaker.

Climeworks says the patented technology can be scaled up to the megaton-per-year range. Such increases will be needed for the world to meet goals set by the 2015 Paris Climate Accord. The Intergovernmental Panel on Climate Change estimates that some 10 billion tons of CO2 will need to be removed from the air every year by 2050.

Rock and a Geothermal Place

Iceland is one of a handful of places that is said to be highly conducive to the Climeworks process.

Thanks to its volcanic origins, the country is one of the world’s most potent geothermal regions, allowing the Earth’s heat to be cheaply converted to electricity with virtually no CO2 emissions.

Climeworks was formed in 2009 by engineering students Christoph Gebald and Jan Wurzbacher as a spin-off from ETH Zurich University.

To date, the company has raised about $110 million in funding, which is said to be the most for a DAC-related startup.

Audi has been working with the Zurich-based startup since 2013. Two years ago the partners built a DAC facility in Hinwil, Switzerland, that filters CO2 from the air and provides it to the beverage industry, where it is converted to carbonic acid.