Audi AG has developed a sporty electric scooter that users can operate like a skateboard by shifting their weight as they stand on the platform.

Audi AG has developed a sporty electric scooter that users can operate like a skateboard by shifting their weight as they stand on the platform.

The carmaker unveiled a concept of the scooter this week and plans to launch a production version late next year. Pricing will start at €2,000 ($2,240). 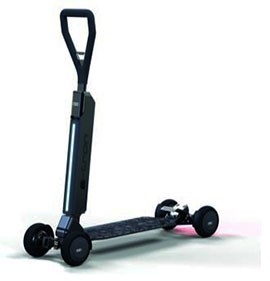 Dubbed the e-tron Scooter, the four-wheeler will have a driving range of about 20 km (13 miles) and be capable of top speed of 13 mph. The pivoting axles will enable tight turns and sporty handling, Audi notes.

The battery, which is housed along with the electronics in the steering handle, can be partially recharged through regenerative braking. A display shows the battery status.

Audi says the prototype weighs 26 lbs and can fold up for storage in a car. The company envisions owners using the scooter as last/first mile transportation from a parking space to their destination.

Other features include LED headlights, a daytime running light and brake lights. A Bluetooth interface, allows users to adjust ride characteristics, also provides theft protection, according to the carmaker.

In addition to marketing the scooter separately, Audi says it is considering teaming the device with its e-tron electric cars as a package deal that includes a dedicated charging port in the trunk. The company also may target fleet applications for corporate campuses or urban housing complexes.