As carmakers expand their electric vehicle lineups, they have quickly discovered it’s not a one-size-fits-all proposition.

This means giving buyers plenty of options, including multiple powertrain systems. The first wave of EVs accomplished this by increasing the output of an EV’s single electric motor or adding a second motor.

Now there’s another option. Audi’s new sport variant of the e-tron crossover is the first mass-production EV to be equipped with three motors. 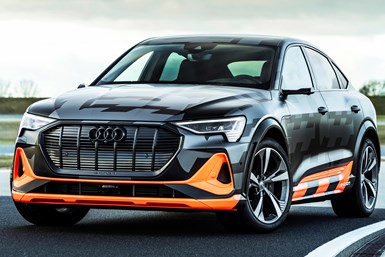 Zero to 62 mph acceleration is listed at 4.5 seconds.

To optimize efficiency, only the rear electric motors are operated during normal driving modes.

The front motor kicks in when more power is needed. All three motors also are used to enhance performance in slippery conditions or during hard cornering.

In addition to boosting output and all-wheel drive, the three-motor system enables torque vectoring between the rear wheels to further enhance stability. 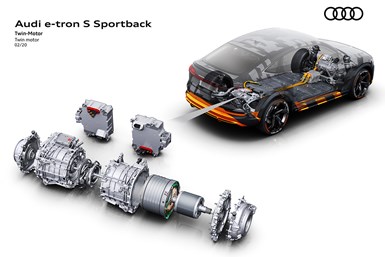 This allows for precise torque distribution to optimize traction as road conditions change.

Each of the rear motors sends drive forces directly to the wheel via a transmission; a mechanical differential is no longer needed. This improves agility and driving dynamics, including higher cornering speeds, Audi notes.

Audi also is launching a less powerful version of the e-tron. The detuned e-tron 50 retains the dual electric motor setup, but power is limited to 308 hp and 398 lb-ft.

The e-tron 50 also gets a lower capacity 71-kWh lithium-ion battery that the company says will provide a 186-mile driving range on the WLTP test cycle. By comparison, the e-tron 55 with a 95-kWh battery is rated at 259 miles.

The company hasn’t indicated what battery the S variants will have. Sales of those vehicles are due to start this spring.