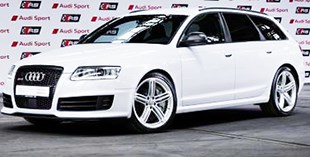 The expansion will be driven by a mix of new SUV/crossover vehicles and next-generation performance models such as the RX 8 sports car, Oliver Hoffmann tells Autocar. Hoffmann and Julius Seebach were appointed co-managing directors of Audi Sport in April.

The souped-up variants of Audi vehicles will be added much more quickly than in the past. Hoffmann says such models could appear as soon as six months after the base vehicle, about one-third the time of current debuts.

This year’s rollout includes RS variants of the Q3 compact sportback and fullsize Q8 SUV. They join the updated RS 4, RS 6 (pictured) and RS 7 cars, plus carryover derivatives of the TT, A3 and A5. An RS version of the tiny A1 car also is said to be under consideration.

All future models will offer some sort of electrification, starting with the 48-volt mild hybrid system in the new RS6. The next-generation RS4 small car will switch to a plug-in hybrid drivetrain when it bows early next decade, Hoffman tells Autocar.

The redesigned R8 also will be electrified, but Hoffmann says a decision hasn’t been made whether it will be a hybrid or a full-electric configuration. Autocar says an EV is more likely.