For the second straight year, the collective value of car brands fell 7% in BrandZ’s annual list of most valuable global brands.

Only one marque improved its score over last year: Tesla. 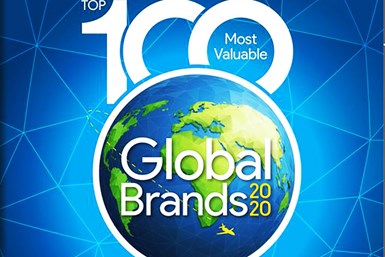 The annual analysis is conducted by New York City-based market research firm Kantar Millward Brown. Rankings are determined by a complex calculation of a corporation’s earnings attributable to a specific brand, along with input from a large-scale global consumer survey.

Toyota has been the top-ranked car brand in all but two of the study’s 14 years. But it ranked only 48th on this year’s list, with its value falling 3% to $28.4 billion. 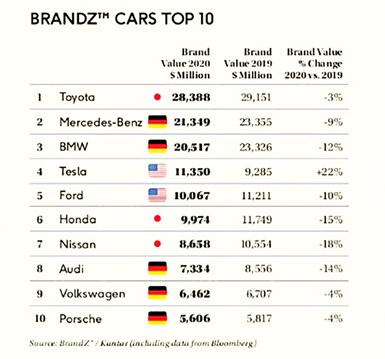 The increase allowed it to leapfrog Ford, Honda and Nissan on the automotive list. Ford and Honda, which this year slipped 10% and 15% respectively, dropped out of the top 100 in 2018.

Overall, the car category is down 12% from the first year of the study in 2006 and even more from its 2008 peak. After cratering during and immediately after the recession (2008-2012), auto brand values rose steadily until the most recent back-to-back declines.

Among the top 10 auto brands, Nissan and Honda had the biggest drop-offs—falling 18% and 15%—this year.

Auto brands have diminished in recent years due to waning consumer enthusiasm, changing attitudes toward car ownership and increased competition from new mobility companies (such as ride-hailing giants Uber and Lyft). 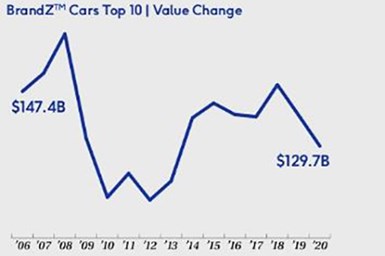 There also is less product differentiation than in the past, according to the authors. As an example, they cite the rapid proliferation of SUV/crossover vehicles and the “sameness” of the segment’s designs.

Similarly, standardized safety features have served to level the playing field. That has occurred even though some companies have been able to effectively market branded systems, such as Tesla’s Autopilot and Cadillac’s Super Cruise semi-autonomous driving technologies, the study notes.

One of the biggest opportunities for car brands to stand out is with the rollout of electric vehicles.

Despite sluggish sales, there is growing consumer excitement about EVs that could jumpstart a carmaker’s overall brand image, Kantar says. Companies with a clear and strong message, such as Mercedes’ EQ sub-brand, will be best positioned to reverse the decrease in their valuation.

In addition to new environmentally friendly products, the authors say, companies can benefit from other sustainability efforts, such as working with energy companies on charging solutions and developing first-/last-mile transportation ideas for cities. However, the disruption caused by the coronavirus pandemic has stalled momentum for many of these efforts, the authors caution.

There also has been a gap in consumer intentions and actions. While as many as two in five car shoppers indicated they would consider buying a hybrid car or EV, Kantar points out that far fewer actually do so.

Tesla has effectively positioned itself as a technology leader rather than a traditional carmaker, Kantar says. The EV maker also has created an overall positive brand experience by disrupting the four P’s (product, price, promotion and place) of marketing.

Toyota has taken a different route. Its sustained success is attributed to product reliability, “outstanding” customer care and providing overall value. The company also is recognized for its leadership in hybrid technology.

In contrast, Toyota’s upscale Lexus arm is focusing on well-appointed interiors and marketing partnerships with other high-end brands, Kantar says. Luxury brand rivals such as Mercedes and Genesis, meanwhile, are differentiating themselves through expressive designs, which the authors note are sometimes intentionally polarizing.

Whatever the message, Kantar recommends telling a consistent story across the brand rather than creating different ones for individual car models. Other tips include: