Autoliv makes a lot of airbags (more than 155 million last year). They deploy from all over a vehicle—steering wheel, instrument panel, knee bolster, seat sides, between the front seats, seat backs and interior roof (side curtains).

The company also offers an external airbag, introduced in 2012 on the Volvo V40, that inflates from the base of the hood/windshield to help protect pedestrians and cyclists struck during an accident.

Now the supplier is applying the safety technology to another group of vulnerable road users: electric scooter riders.

The airbag extends outward from the top of the scooter just prior to impact. Shaped like a small mattress, the system is designed to cushion riders and prevent them from directly striking hard surfaces. 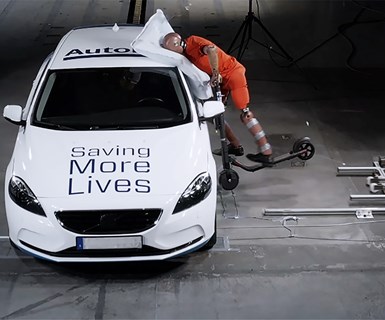 Autoliv says a recent crash test (watch the video), conducted with a concept module at the company’s technical center in Sweden, indicates the airbag can reduce injuries to a rider's head and chest. The company plans to work with scooter manufacturers to refine the device.

In a head-on collision with the front of a car, the supplier says the scooter airbag could work in tandem with a pedestrian airbag to provide further protection.

The rapid influx of bike- and scooter-sharing services creates new safety concerns. Such devices are accessible, convenient, inexpensive and relatively fast (15 mph or more), which also makes them dangerous when weaving through congested city centers—especially at night. Making matters worse, many riders choose not to wear helmets.

There hasn’t been much hard data yet on accidents and injuries involving e-scooters, which didn’t start to take off in the U.S. until late 2017. But the initial reports are troubling.

Safety concerns (and clutter) became so dire last year that some companies pulled bikes and scooters in some areas, and several cities banned them altogether. Uber, for example, stopped offering scooters in San Diego and began working with the city to develop “sensible” regulations.

Autoliv aims to be part of the solution by adapting its automotive technologies to scooters and other emerging “micromobility” systems.