The renowned Mayo Clinic in Jacksonville, Fla., has begun using fully autonomous driverless vehicles to transport COVID-19 tests from a drive-thru testing site to a processing laboratory on the facility’s campus.

The self-driving vehicles reduce human exposure to the test kits and free up staff time that can be dedicated to direct treatment and care for patients.

The Mayo program is run in partnership with French autonomous vehicle producer Navya, Beep and the Jacksonville Transportation Authority (JTA). 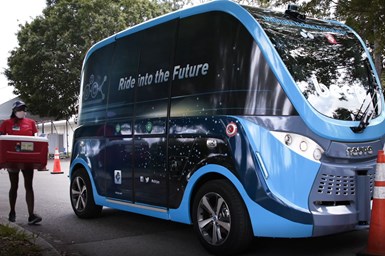 Four of Navya’s self-driving electric shuttle vans have been redeployed from Orlando’s Nona smart city community, where they are operated by Beep. The Orlando-based logistics firm is overseeing the Mayo program in conjunction with JTA.

In the Mayo application, workers at the test site load completed test kits into a cooler that is placed into a shuttle. The shuttle travels about half a mile at speeds up to 12 mph to the drop-off point at the clinic. Some 200 test kits are delivered per day.

A human-driven vehicle follows the shuttle vans to ensure they reach their destination safely. No other vehicles or pedestrians are allowed on the route.

No modifications were necessary for the Navya shuttles, which are sanitized frequently.

Some of the Navya vehicles also are being used to deliver medical supplies between locations within the Mayo campus.

Other applications, such as transporting laundry from the hospital to the washing facility also are being considered.

Beep and Navya are offering the vehicles and their services for free. The vehicles are recharged on site at the Mayo campus.

In normal operations, the vans can carry as many as 15 passengers.

Nayva vehicles are being used in pilot programs in France and several other global cities, including Ann Arbor, Mich., and Las Vegas. The company opened a production facility in Saline, Mich., in 2017.

JTA has been testing autonomous vehicles from Navya and other manufacturers for several years. The organization aims to supplement its current Skyway tram service in downtown Jacksonville with self-driving shuttle services in 2023 as part of the city’s Ultimate Urban Circulator program.