To date, developers of autonomous vehicle systems primarily have tested their wares under near-optimal conditions. Waymo, for example, has focused its efforts on the sunny suburbs of Phoenix, which features relatively light traffic and well-maintained streets. 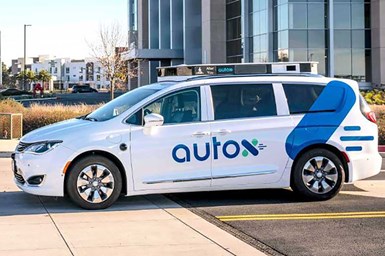 AutoX, a 3-year-old startup with dual headquarters in Hong Kong and Silicon Valley, is taking a different tack. It’s headed straight to the deep end with a new ride-hailing program in Shenzhen, China, that will use automated Chrysler Pacifica hybrid-electric minivans—like the ones Waymo is using in Phoenix, only with AutoX’s autonomy platform instead of Waymo’s.

Testing to the Extreme

AutoX, which is backed by Chinese tech giant Alibaba, has been testing autonomous vehicles in Shenzhen for about a year. The bustling city is home to some 20 million people. There’s construction everywhere. Roads are shared by a mix of cars, scooters, bikers and pedestrians. Obeying traffic laws isn’t a high priority.

As for the weather, it’s foggy and rains a lot. We’re talking torrential downpours (about 78 inches per year), possibly even a monsoon.

Such a harsh environment is hardly ideal for anything. But it’s exactly what AutoX wants. The company reasons that early real-world testing under worst-case scenarios will accelerate development and help drive improvements that will enable self-driving cars to be used virtually anywhere.

“We're tackling the most difficult problems first to then scale it back if we need to in easier areas," says COO Zhuo Li. Noting that Shenzhen’s seemingly never-ending construction projects can change street configurations on a daily or, in some cases, hourly basis, Li says AutoX’s technology must be extremely powerful and precise.

At CES this week, AutoX announced the partnership with Fiat Chrysler Automobiles, which will supply stripped-down versions of the Pacifica. Two other Chinese companies—lidar specialist RoboSense and drone manufacturer DJI—also are contributing to the project. But most of the tech comes directly from AutoX.

Public service in Shenzhen is due to start within a few months and eventually ramp up to 100 vehicles. Riders can book a trip via a smartphone app. Initially, a backup driver will be onboard to take control of the vehicle if necessary.

AutoX says it chose the Pacifica because of the vehicle’s spacious interior and redundant electrical systems for braking and steering functions. Another plus: The vehicle already has proven its autonomous bona fides with Waymo.

In addition to FCA, AutoX is testing its technology with several other carmakers elsewhere in China and the U.S. It also plans to launch a robo-taxi service in Europe later this year and eventually expand to California, where it recently applied to test vehicles without a safety driver—currently Waymo is the only company approved for such operation.

AutoX also wants to license its technology to automakers, ride-sharing companies and other third-party operators. A successful rollout in Shenzhen—bad weather and all—would go a long way to convince potential partners to get on board.