If you want to buy an American vehicle, your best bet is the midsize Ford Ranger pickup truck.

But you can’t go wrong if you opt for one of three Tesla electric vehicles, an Alabama-built Honda, the Jeep Cherokee, Chevy Colorado or the all-new Corvette. These cars and trucks contribute the most to the U.S. economy, according to Cars.com’s latest American-Made Index (AMI).

The all-new Ranger, which is produced at Ford’s Wayne, Mich., plant, was No. 1 on the list. It displaces the Belvidere, Ill.-built Jeep Cherokee, which dropped to second on the AMI after finishing first in the previous two years. (Other recent winners include the Jeep Wrangler, Toyota Camry and Ford F-150). 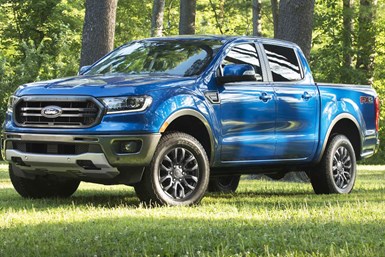 In addition to being assembled in Michigan, the Ranger derives 70% of its content from the U.S. and Canada. It benefited this year from increased domestic-sourcing of its 2.3-liter 4-cylinder engine.

Ford resurrected the nameplate in late 2018 after a 7-year hiatus in North America. The carmaker continued to sell an international version of the Ranger in 150 other countries.

Tesla and Honda each had three vehicles ranked among the top 10.

This is the first year Tesla supplied enough information to be included in the list, which is in its 15th year. The carmaker assembles vehicles at its Fremont, Calif., plant and sources the bulk of the electric drivetrains used in the EVs domestically.

The three Honda models are produced at the company’s Lincoln, Ala., factory. Last year, Honda and its upscale Acura brand accounted for half of the top 10 and seven of the top 15 models.

The top 2020 AMI vehicles and where they are built are:

In a separate Cars.com survey conducted last month of 1,000 licensed drivers in the U.S., seven in 10 respondents indicated a car’s U.S. economic impact would play a significant or deciding factor in buying a new vehicle. That’s up slightly from last year.

More than one-third said the ongoing COVID-19 pandemic made them more likely to buy an American-made model. This compares to just 4% who said they were less likely to buy locally due to the coronavirus.

But most buyers don’t actively seek information about where a vehicle is built or how much local content it contains—and nearly one in five said they don’t care.

There also is a lot of confusion about where carmakers are based. Only half of the respondents know Tesla is American. Nearly two in five think Hyundai is a Japanese or Chinese carmaker; only 29% correctly identify it as Korean.

For the index, vehicles are ranked on a 100-point scale. Criteria includes assembly location, parts sourcing as determined by the American Automobile Labeling Act (AALA), factory employment relative to sales and sourcing of engines and transmissions. The methodology and weighting of the factors have changed slightly from previous years.

To be considered for the list, vehicles had to be assembled in the U.S. Low-volume models (fewer than 1,000 units) and those with a GVW of 8,500 lbs and above (including heavy-duty pickups and fullsize vans) didn’t qualify because manufacturers aren’t required to submit sourcing data for them.

This winnowed the number of eligible vehicles ranked by Cars.com to 91—including cars made by 13 automakers in 14 states—from the more than 350 nameplates sold in the market.