No details yet on OEM participation
#facilities

The Beijing auto show is confirmed to open on Sept. 26, after being postponed for five months because of the COVID-19 pandemic.

The new date was announced in April with no other details. The biannual expo alternates with the Shanghai auto show as China’s largest such event. The Shanghai show plans to open at its normal time next year in early May. 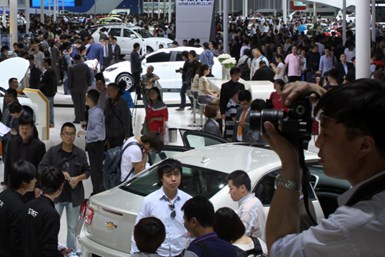 This year’s Beijing show will begin with two days of media previews on Sept. 26-27. Public days will run Sept. 28 through Oct. 5, according to the China Council for the Promotions of International Trade.

But the organizer still hasn’t said how many participants it expects this year. The event’s still-deactivated website offers no information about exhibitors, media or ticketing.

In recent years, the Beijing show has claimed some 800,000 visitors and 1,200 exhibitors. Its postponement earlier this year was among the first of several major auto expos—notably Geneva, New York City, Detroit and Paris—that canceled their 2020 events outright.

Detroit’s move from January to June this year was stymied when its venue was converted into a field hospital for would-be COVID-19 patients. But the show is on track for a return in mid-June next year with multiple outdoor features that expand its footprint into downtown Detroit.

The Frankfurt auto show, which alternates with Paris, saw OEM and public participation plunge last September. The giant expo has ended its 69-year-run in Frankfurt and will return in September 2021 as a mobility-focused show in Munich.

Last week, the Washington, D.C. auto show—originally scheduled for late January—said it will open on March 25. But the concurrent MobilityTalks conference remains canceled.