Bentley Teases the Future of Coachbuilding

Bentley’s Mulliner division is no stranger to coachbuilding. In fact, it pretty much invented the term, with origins that date back to the 1500s. Of course, at that time, the company’s focus was on luxurious horse-drawn carriages.

In 1897 the company started to turn its attention to blinging up a new invention: cars. Mulliner first partnered with Bentley in 1923, when it provided the chassis for the classic 3 Liter roadster.

Other projects include the legendary 1952 R-Type Continental, the State Limousine for England’s Queen Elizabeth and restored replicas of Bentley’s 1939 Corniche and 1929 4.5-liter “Blower” Series.

Now Bentley is turning to Mulliner, which it acquired in the early 1970s, for what it hails as the future of coachbuilding. 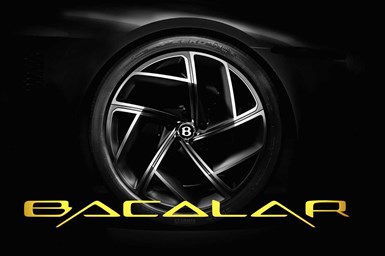 The new model, dubbed the Bacalar, will be unveiled at next month’s Geneva auto show. The name comes from a lake in Mexico that’s known for its bright blue and turquoise waters.

Details are scarce, other than the new ride will be a grand tourer-type coupe with a “dramatic design” inspired by last year’s sleek EXP 100 GT concept—including the use of “ethically sourced and sustainable” materials. However, media reports speculate that the Mulliner Bacalar will be powered by Bentley’s 6.0-liter W-12 engine rather than the concept model’s all-electric powertrain.

Production is expected to be limited to about a dozen vehicles, with pricing starting in the $2 million range.

Mulliner’s stated mission is to turn customer’s dreams into reality, limited only by their imagination. It talks about the “beauty of bespoke,” which is the British way of saying highly customized.

After all, “In the world of Mulliner, anything is possible.” And the rest of us can keep on dreaming.