The swoopy two-door touring coupe stretches 19 feet front to back and is nearly eight feet wide. The exterior features a curvaceous body, an enormous faux-grille in front and 6-foot-long side doors that pivot upward on forward-mounted hinges.

The exterior is painted with a sustainable and environmentally friendly pigment made from rice husk ash that creates a spectrum of autumn colors. 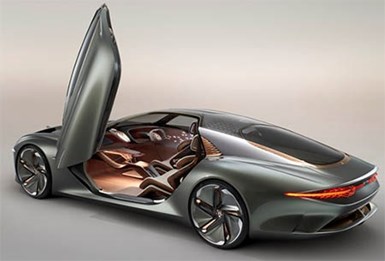 Bentley says the EXP 100 GT’s four electric motors can propel the car from zero to 100 km in less than 2.5 seconds and achieving a top speed of 300 kph (185 mph). The coupe also has a projected driving range of 700 km (435 miles) per charge—assuming it uses of next-generation batteries with five times the energy density of today’s devices.

The company concedes that no such batteries are likely to become commercially available until at least 2025. The EXP 100 GT also assumes an era of fully autonomous driving, which the carmaker says is not likely to arrive until 2035.

The concept’s interior is illuminated in part by a glass roof embedded with prisms that relay light to the interior through fiber optics. Other systems can project images and textures on interior surfaces. 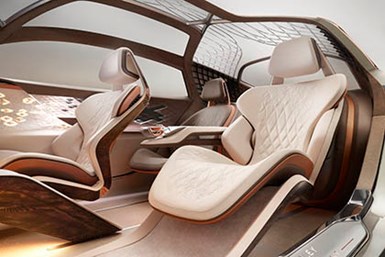 Adaptable biometric seating can swivel around for living-room-style conversation during autonomous vehicle operations. The seats themselves are equipped with a proactive sensor system that monitors body weight, temperature and position, automatically adjusting the seat accordingly for exceptional comfort.

Occupants control the cockpit environment with gestures and voice commands via the Bentley Personal Assistant, which employs what the company calls “emotionally intelligent” artificial intelligence.

Among the options are “modes” that can be switched on or off to suit the moment. Enhance brings exterior sounds, smells and light into the cabin for a top-down connection with the car’s surroundings, even though the cabin is sealed. Cocoon does the opposite, turning the windows opaque, purifying the air. Capture records trips from inside and outside the vehicle.