The time has come to take action
#Ford #GeneralMotors #people

It was a surreal scene. The top executives of 10 of Detroit’s largest companies—including U.S. Big 3 automakers—gathered with Mayor Mike Duggan and Rev. Wendell Anthony, president of the Detroit branch of the NAACP, on Wednesday for a joint news conference.

All were wearing face mask to protect themselves against COVID-19. One by one, they briefly uncovered their faces and took turns speaking with a common purpose to unmask an even larger societal problem: systemic racism.

The event was held in the wake of the killing of an unarmed black man, George Floyd, at the hands of four white male police officers in Minneapolis on May 25.

The leaders agreed to work in support of justice related to the recent events and to take action against racism in their own companies. The initiative includes four broad-based commitments:

Several of the companies also have addressed the issue in letters to employees over the last few days.

Here are a few highlights from Wednesday’s event.

Barra: We Will Stand Up Against Injustice

GM’s Barra acknowledges there “may not be a precise roadmap” to achieving inclusion. Even so, she says, the company must continue to work toward the goal. 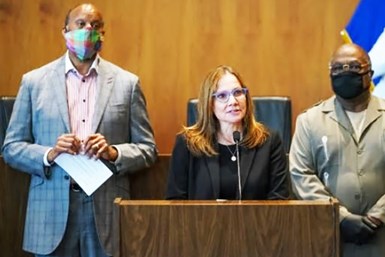 "We will not allow ourselves the passivity of urging others to act. We will act," she asserts.

“We know we’re not perfect. Pretending to be is part of the problem,” she adds. “To any GM employees who have the courage to speak up – we will hear you. We will stand up against injustice. And that means taking the risk of expressing unpopular or polarizing points of view, because complacency and complicity sit in the shadow of silence."

In her letter to employees, Barra vowed to commission and chair an inclusion advisory board by the end of June.

Ford: No Interest in Superficial Actions

“Our community can’t thrive if all members can’t participate in its progress or if some are excluded and targeted because of the color of their skin,” Ford says. “There are no easy answers, and we aren’t interested in superficial actions.”

But, he declares, the time has come to work together and “effect real lasting change.”

Ford says the carmaker is committed to listen and engage with leaders to build inclusive environments and “eliminate the fear that far too many African American members face each day.”

He adds, “It would be easy to say that one person, one company or even a group of companies can’t make a difference, that the issues are too deep. But I don’t believe that. I’ve seen what we can do in Detroit.”

Earlier this week, Ford and CEO Jim Hackett said the company and its workers can’t turn a blind eye to racism or accept any sense of order that’s based on oppression. “As long as we have the privilege to breathe, it's on all of us to summon new levels of empathy and humanity," Ford adds.

Stewart: Racism of Any Kind is Decisive

FCA’s Stewart warns that society has settled into a “somewhat sense of complacency where there are tolerance and acceptance around social injustices.”

Such behavior has to change, he says: "I say to you today, no more. No more. Racism of any kind is divisive. It's ugly. And it brings about the worst of humanity."

Despite being deeply disturbed by recent events, Stewart says he feels the strength of communities and societal conviction to bring about social change by embracing and celebrating diversity.

"We've got to continue to partner together—community leaders, business leaders, government, all of us—to find solutions to shift our society and stand against racism, against violence,” Stewart declares.

Floyd’s death and other incidents of unwarranted police violence against black people have sparked nationwide protests, which in some cases have been marred by looting, destruction and more violence. One of the Minneapolis police officers has since been charged with second degree murder, while the three others face charges of aiding and abetting him.

The united front among Detroit business leaders to stand up against racism is a step in the right direction.

But no new specific programs or timelines were announced. Yet.

Now it’s time to enact plans and change for the better.