General Motors, Ford and Fiat Chrysler Automobiles have agreed to suspend production in North America for two weeks to slow the spread of the coronavirus.

Their plan is to use the downtime to deep-clean all plants. The companies also vow to come up with ways to modify operations so they can resume some semblance of production while maintaining the social distancing recommended by the Centers for Disease control.

Planned steps will include rearranging shift schedules to allow extra time for cleaning between shifts. There also will be a bundle of procedures to provide a safe workplace by keeping workers farther apart on the job, during breaks and at shift changes.

All this came out of a suggestion last weekend by the United Auto Workers union that the Big Three producers suspend all operations in the U.S. for two weeks. 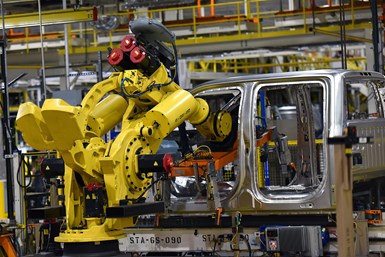 The companies initially balked at that idea, according to the union. But everyone did agree last weekend to form a CEO-level task force to look into options. (The carmakers also formed a similar team in Canada with the Unifor union there.)

UAW President Rory Gamble gave GM, Ford and FCA 48 hours to present a plan or face what he described as a union backed by “powerful allies” that would “use any and all means” to safeguard its members.

By late last night, all parties were on the same page, and the plan for a two-week plants shutdown—now expanded to cover facilities in Canada and Mexico—were a go.

The break will give everyone a chance to formulate specific plans, juggle their shift schedules and determine how far their tightly orchestrated shop floor activities can be modified to lower the chances of worker contamination.

Details about what that will mean for output at each carmaker will become more apparent in coming days. Here’s what we right now:

GM, blaming “market conditions,” confirms it will phase out production temporarily across its North American manufacturing operations until at least March 30. The company did not indicate a timetable for the shutdowns.

GM says it will use the hiatus to deep-clean its facilities and “continue to protect people.” The company’s production plans thereafter will be updated week by week.

Ford will begin its shutdown after shifts end on March 19, with plants remaining shuttered through the month. The company wants all salaried employees who can avoid coming to the office to work from home instead.

The company also idled its Michigan Assembly Plant outside Detroit today, after a worker tested positive for COVID-19, the disease caused by the coronavirus.

Besides thoroughly sanitizing its facilities during the shutdown, Ford vows to figure out “unique and creative solutions” to enhance the safety of everyone from factory workers and dealers to customers and suppliers.

FCA confirms it will stop operations at all its North American factories, beginning today and running through the end of March.

As with GM and Ford, the company will use the period to clean its plants and set up new protocols for shift timing, shift structure and social distancing practices.

CEO Mike Manley, who visited FCA plant floors in Michigan yesterday, sums up the attitude of the carmakers and UAW: “We will continue to do what is right for our people through this period of uncertainty.”

Providing safe working conditions is a critical and worthy goal to help keep auto plants operating. But it can go only so far. Employees will continue to bear the burden of being careful about exposure outside the plant.