The viral commercial has paid off well for Jeep. Now’s your chance to own the sporty 4x4.
#Chrysler #Fiat #Jeep

Can’t get enough of the Jeep Gladiator Super Bowl ad featuring Bill Murray and his sidekick Poppy the groundhog? 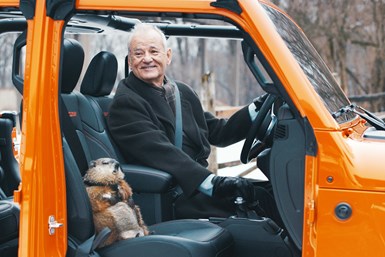 No worries. If you act fast, you may be able to score the fully loaded Gladiator 4x4 used in the viral commercial for the list MSRP of $57,350. The orange Rubicon edition, which had been on loan from Moore Motors in Caro, Mich., was returned to the dealership a few days after the spot aired during the big game on Feb. 2.

Some 102 million people tuned into this year’s Super Bowl. It isn’t clear exactly how many actually were watching at any given point of the game, let alone a specific ad during a timeout.

But even if every single television set mysteriously went blank, people left the room or otherwise were preoccupied when the ad ran, Groundhog Gladiator still has topped more than 100 million views. Jeep surpassed that threshold across its social media feeds within a week of posting the video, including the extended-length version above.

The ad was conceived by Fiat Chrysler marketing chief Olivier Francois, who has a history of making such star-powered spots. The talent suited up for previous FCA Super Bowl squads has included Bob Dylan, Clint Eastwood, Eminem and Oprah.

Francois, who had met Murray briefly four years ago, sent a letter pitching the idea in October. It seemed like a natural: This year’s Super Bowl fell on Groundhog’s Day—only the second time this has happened in 54 years.

Murray, of course, starred in the hit 1993 film “Groundhog Day,” in which his character—a self-centered weatherman assigned to cover the titular holiday in Punxsutawney, Pa.—is forced to live the same day over and over until he gets it right.

Only one problem, FCA didn’t hear back from the notoriously aloof Murray. Francois had given up and wasn’t going to run any Super Bowl ad. Then on Jan. 17, less than three weeks before the game, Murray unexpectedly called and signed on to the project.

The commercial was created and filmed over three days in Woodstock, Ill., where the movie was filmed. Much of the script was ad-libbed by Murray and his brother (Brian Doyle Murray), who recreated his role as the mayor of Punxsutawney.

Instead of repeating the same day, Murray’s luck takes a turn for the better when he spots the Gladiator and remarks, “That’s different.” He then proceeds to take Poppy on a series of buddy adventures in the Gladiator, ending with the tagline: “There’s only one Jeep.”

The widely acclaimed 60-second spot reportedly cost about $11 million—not including Murray’s salary. It’s been money well spent for Jeep, at least in terms of delivering a positive brand message to a massive audience.

So, if you’re in the market for a well-appointed Gladiator, this one has a super story to tell. It may even forecast the weather.