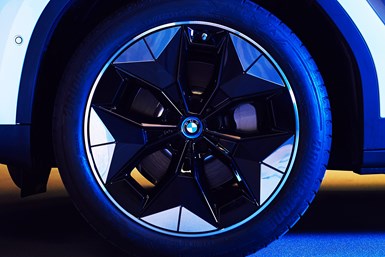 BMW is introducing a new design feature—customizable, lightweight aerodynamic wheels—to enhance the styling and efficiency of its electric vehicles.

The new wheels will debut later this year on the all-electric iX3, which the carmaker calls a sport activity vehicle. Applications in the i4 sedan and flagship iNext SUV/crossover will follow next year.

BMW estimates the improved efficiency will add 10 km (6.2 miles) to the iX3’s driving range. The company previously has listed a 400-km target for the tiny crossover (on the European WLTP test cycle), meaning the wheels would provide a 2.5% boost.

BMW claims the system is an industry first for cast aluminum wheels with inserts comprised of a plastic carrier and an aluminum surface.

The precision-molded inserts are integrated into the outside of the wheel between the spokes, without any visible gaps. This allows them to reduce air turbulence within the wheel arch.

The patented design also requires less material than other aerodynamic wheels, according to BMW.

BMW says the aero wheels can be customized in a variety of ways, including different colors (with a matt or polished finish), sheens and patterns. The inserts also can be combined with various surface designs within a single wheel.