BMW Group has added another battery supplier to support its aggressive electrification plans.

Under the latest deal, Sweden-based Northvolt will begin supplying lithium-ion batteries to BMW brands in 2024. The multi-year pact is valued at €2 billion ($2.3 billion). 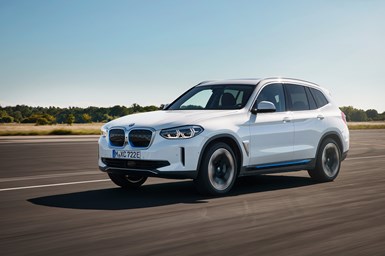 The multi-source approach will help BMW overcome potential supply constraints as it ramps up production of EVs and hybrids. The carmaker plans to have 23 electrified models on the road by 2023, with more than half being fully electric—including the all-new iX3 crossover (pictured) that will bow next year.

Northvolt will produce BMW’s battery cells at a new factory the supplier is constructing in northern Sweden. The facility is expected to have capacity of 40 GWh by 2024.

Northvolt, which has two other plants in the works, aims to control 25% of Europe’s EV battery market by 2030. The company raised $1 billion last year from investors, including BMW and Volkswagen Group.

All three of BMW’s battery suppliers have committed to use environmental friendly production methods.

This will reduce carbon dioxide emissions by 10 million metric tons over the next decade, according to the carmaker. BMW says the savings is equivalent to the current annual CO2 emissions for city with 1 million-plus residents, such as Munich. The company notes that battery production accounts for 40% of an EV’s manufacturing emissions.