BMW Powers Up i4 EV

BMW AG’s upcoming i4 electric sedan reportedly will produce 530 hp and be capable of accelerating from zero to 100 kph (62 mph) in four seconds.
#BMW #HP #europe

BMW AG’s upcoming i4 electric sedan will produce 530 hp and be capable of accelerating from zero to 100 kph (62 mph) in four seconds.

Source tell Roadshow that BMW is targeting a 600-km (373-mile) driving range on the WLTP cycle for the new EV. The car’s 80-kWh battery can be replenished to 80% capacity in about 35 minutes. 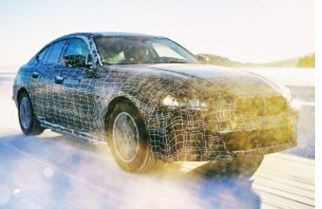 BMW is expected to unveil the i4 late next year and launch production in the first half of 2021. Even higher performance variants likely will be added later, Roadshow says.

The carmaker showed the vehicle (in camouflage) being tested in the Arctic earlier this year.