BMW AG has begun building prototypes of the upcoming iNext electric vehicle at its pilot manufacturing plant in Munich. 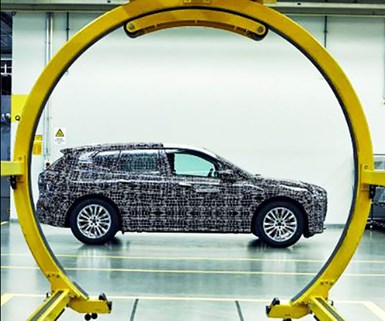 The carmaker aims to complete 100 prototypes before the flagship SUV/crossover vehicle is launched in 2021. Production models will be manufactured at BMW’s Dingolfing, Germany, facility.

A new rotary bonding technique is being used to join the car’s aluminum and high-strength steel panels without rivets or structural adhesive. Friction heat generated by a steel element piercing an aluminum part fuses the two components, according to the carmaker.

Automated lasers are used to measurements and surface quality once the bodies are assembled, which BMW says is faster and more precise than traditional manual methods. A high-resolution scanner then compares the complete surfaces of body parts to CAD files. The carmaker also is using an augmented reality app to speed up the way bolts in the floor assembly and validated.

The prototype vehicles are scanned by four x-ray scanners to examine joints and other internal components—detecting objects as small as a human hair. The x-rays are used to create a multilayered 3D image, which BMW says it can use to evaluate new materials and bonding techniques without having to dismantle a vehicle.