BMW CEO Oliver Zipse describes the company’s all-electric Concept i4 as a blend of the 3 Series GT and 4 Series Gran Coupe fitted with an electric powertrain that provides “thrilling performance.”

But the real benchmark comes from outside BMW’s lineup. The production version of the i4 concept, which is due in about 18 months, takes aim at the hot-selling Tesla Model 3 sedan.

Luckily, BMW doesn’t have to match Tesla’s success. That’s extremely unlikely. Tesla sold nearly 368,000 vehicles last year, with the Model 3 accounting for the bulk (more than 300,000) to make it the best-selling EV worldwide. 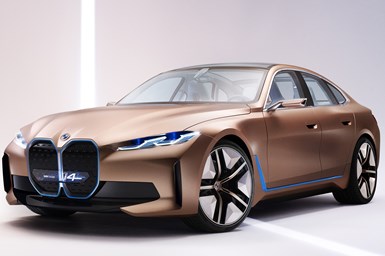 What the i4 and this year’s iX3 crossover will do is help boost the luxury carmaker’s sales of electrified vehicles, which it needs to meet tougher European emissions requirements. BMW sold about 129,000 EVs and plug-in hybrid models (led by the i3 electric city car and 530e PHEV) in 2019.

A lot more EVs are on the way. BMW and its Mini small car unit aim to offer 25 EVs and PHEVs by 2023. In addition to the i4, the flagship iNext crossover vehicle is due to bow next year.

As BMW ramps up its electrified lineup, the company has to be careful to maintain its core brand characteristics. 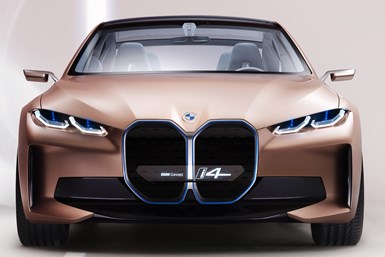 If the Concept i4 is any indication of what’s to come, this shouldn’t be a problem.

From a performance standpoint, the compact EV kicks out 530 hp and can zip from zero to 62 mph in about four seconds.

Meanwhile, the car’s 80-kWh battery should ease any range anxiety with an estimated 363-mile capability on the WLTP cycle.

“Our customers will never have to compromise between driving pleasure and sustainable mobility,” Zipse asserts.

The i4’s styling also is on brand. Based on the 3 Series architecture, the concept features a sleek roofline, short overhangs, flush door handles, thin headlights and an oversized version of BMW’s signature kidney grille. The latter now is used to house a variety of driver assist sensors. 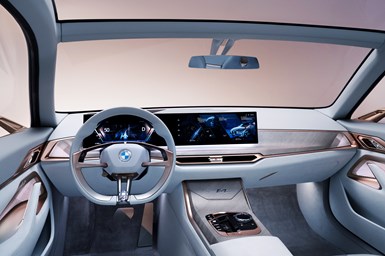 In the rear, a prominent air diffuser has been added. In addition to providing aerodynamic benefits, the device is designed to convey a sporty feel in place of high-end exhaust pipes, which an EV doesn’t need. BMW says the design could be a staple in future “i” models.

The concept also marks the first use of BMW’s new logo, which the carmaker says is designed to optimize digital marketing. Interior goodies include a large curved infotainment touchscreen that is angled toward the driver.