Wisk, a joint venture between Boeing and Silicon Valley-based startup Kitty Hawk, aims to become the first in the world to test passenger service for autonomous air taxis.

The 7-month-old company inked a deal with New Zealand’s government this week as part of the country’s Airspace Integration Trial program. The partners didn’t provide a timeline for the tests, which must be certified by New Zealand’s Civil Aviation Authority.

The program will use the electric-powered Cora two-seater that Kitty Hawk has been developing for several years. The module is a vertical takeoff and landing (VTOL) aircraft, which means it operates like a helicopter and doesn’t need a runway.

Lift is generated via 12 independent rotors. Safety features include a “triple redundant flight computer” to ensure precise navigation. There also is an emergency parachute (for the aircraft itself) in case the rotors become inoperable. 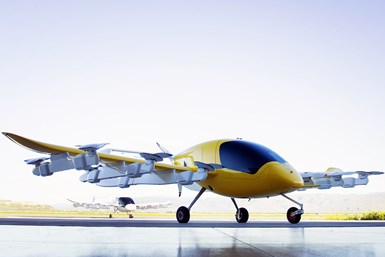 Riders would summon the aircraft via a smartphone app. The actual flying would be handled by a combination of autopilot systems and a remote human pilot.

Kitty Hawk, now joined by Wisk, has been testing Cora prototypes in New Zealand since 2017. More than 1,000 test flights have been completed during this time.

Unnamed urban aircraft such as Cora can provide several potential benefits. In addition to reducing traffic congestion and helping the country meet its target of becoming carbon neutral by 2050, electric flying taxis could provide a $7.9 billion boost to New Zealand’s economy over the next 25 years, government officials estimate.

Named after the North Carolina beaches where the Wright Brothers took flight for the first time in 1903, Kitty Hawk is backed by Google co-founder and former CEO Larry Page. The company is run by Sebastian Thrun, an artificial intelligence expert who helped launch Google’s self-driving car program, now called Waymo.

The startup turned to Boeing, which is developing its own VTOL technology, to provide the additional funding and aerospace expertise needed to get the program, uh, off the ground.

But it has plenty of competition. More than a dozen companies are developing and testing VTOLs. The list includes several carmakers—either on their own or with a tech partner—such as Aston Martin, Audi, Daimler, Geely, Hyundai, Toyota and Volkswagen.