Got a demanding job that requires a rugged and powerful work truck? If so, Bollinger Motors says its full-electric B2 Chassis Cab (B2CC) is up for the task—whatever it is. 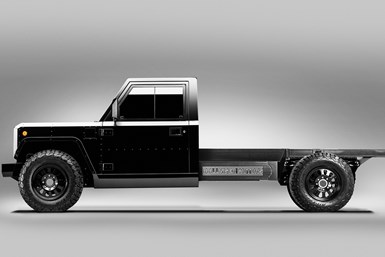 Built on Bollinger’s flexible E-Chassis platform, the B2CC can be configured in a variety of wheelbases and cab variants to handle just about any commercial application, according to the Ferndale, Mich.-based startup.

The company lists everything from construction, landscaping, towing and contractor (electricians and plumbers) jobs to security, emergency response and non-tactical military applications among potential uses.

Customers will be able to choose among 2- and 4-door body styles as well as full- and cutaway cabs.

A 120-kWh battery is standard, while a more powerful 180-kWh unit is optional. The B2CC also is fitted with a 10-kW on-board charger/inverter.

As with Bollinger’s upcoming B1 SUV and B2 pickup, the B2CC will be powered by two electric motors and have a 5,000-lb payload. In the B1 and B2, the configuration generates 614 hp and 668 lb-ft of torque.

Among the other features are:

Bollinger filed for a U.S. patent for the E-Chassis, which also will carry the B1 and B2, earlier last November. The company claims the platform is the first electric architecture for Class 3 vehicles. 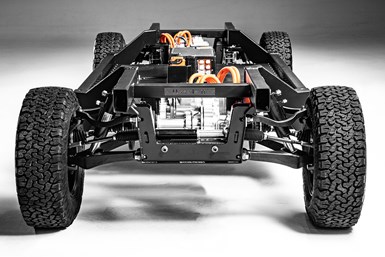 Pre-orders for the B1 and B2 models, both of which start at $125,000, already have started. Production is due to launch next year.

Pricing will vary by configuration and application for the B2CC but likely will be greater than that of its siblings. Bollinger notes that part of the hefty price tag can be recouped by lower operational costs. The new chassis will be available to commercial outfitters in late 2021.