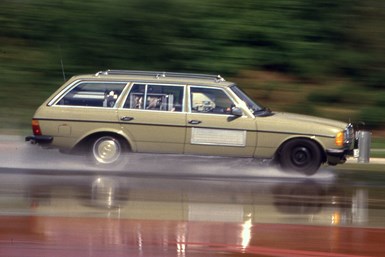 Over the past 25 years, the anti-skid technology has become ubiquitous throughout the industry. It’s mandated in most developed countries and now is installed on more than four in five new passenger vehicles worldwide, according to Bosch.

The supplier, which co-developed ESC with Daimler, says the technology can prevent as much as 80% of all skidding accidents. Bosch estimates that ESC has saved some 15,000 lives and prevented nearly 500,000 personal injury accidents over the last 25 years in the European Union alone.

ESC builds on antilock braking and traction control systems, which Bosch helped pioneer in the late 1970s and mid-1980s, respectively. 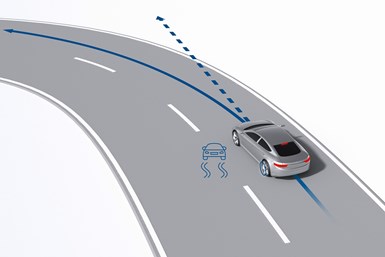 As its name implies, ESC enhances stability and minimizes skidding. Sensors continually monitor if a vehicle is traveling on its intended path by comparing trajectory with the steering wheel angle. This happens 25 times per second.

If the two measurements diverge, ESC takes corrective action by reducing engine torque and applying the brakes at individual wheels as necessary.

As you might expect, the technology is particularly handy on wet and icy roads. It also can be a big help during evasive maneuvers (swerving to avoid another object) or if a driver tries to take a curve too fast.

Bosch and Daimler began developing ESC independently of each other in the early 1980s.

By 1992, the companies decided it was more productive to work together and set an aggressive goal of introducing the technology within 36 months. They met the target with the S-Class. 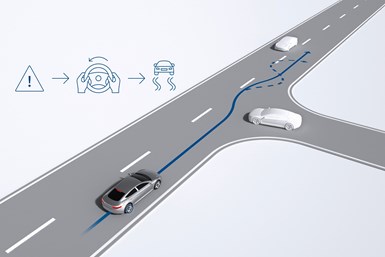 Initially, however, ESC mainly was limited to being a pricey option on high-end models such as the S-Class. That all changed in 1997 when an A-Class small car, without ESC, was filmed flipping over while making evasive maneuvers (avoiding an imaginary moose, for which such tests are named) during testing by a Swedish automotive magazine.

Mercedes responded by making ESC standard on the A-Class and most of its other vehicles. Other carmakers followed suite in subsequent years.

The Rest is History

In 2011, the EU began phasing in requirements for ESC on passenger and commercial vehicles. The U.S. standardized the technology in 2012.

Bosch says it has continually improved the technology, which it calls electronic stability program, over the years. This includes making the sensors smaller, cheaper and more reliable. To date, the company has produced some 250 million ESP units.