It knows where you are, even when the GPS doesn’t
#europe #tech #Bosch

For navigation systems to work properly, they need to know where you are. At all times.

But that’s not always possible with current GPS, which may temporarily lose a signal when traveling through a tunnel or urban canyon blocked by tall buildings. This can result in a “flip book” effect—jerky movements and loss of directional orientation—on the display screen, or even cause drivers to miss a turn.

Bosch says its second-generation microelectromechanical sensor (MEMS) can keep motorists on track, even if the GPS signal is out. 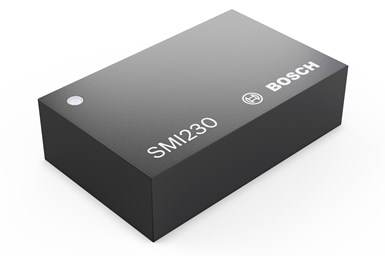 The SMI230 unit is faster and more precise than the previous SMI230, which was introduced in 2014, according to the supplier. The new sensor also can operate under higher temperatures (105°C versus 85°C for the older SMI130).

As with its predecessor, the new chip integrates an accelerometer and yaw sensor in a single housing. The 6-axis inertia sensor features an enhanced accelerometer.

The system works in tandem with GPS to constantly monitor a vehicle’s position. If the latter is lost, SMI230 steps in to approximate changing positions based on vehicle speed and steering inputs. The information is used to plot a car’s movement on the navigation display until GPS resumes.

Bosch claims the system will provide an accurate reading even if the dropped signal persists for some time. It can measure tilt, motion, vibration and shock sensing regardless of the control unit’s mounting orientation.

“When the navigation system is at a loss, Bosch semiconductor sensors ensure that the car doesn’t lose its way,” attests Jens Fabrowsky, member of the executive management of Bosch’s Automotive Electronics division.

In addition to navigation, Bosch says the SMI230 MEMS sensor can be used in several other non-safety-critical applications. These include:

Bosch recently started production of the SMI230 at its Reutlingen, Germany, facility.