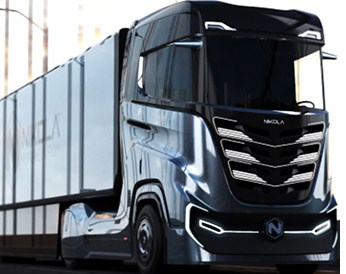 Hartung affirms the supplier’s previous predictions that fuel cells will be used in as many as 20% of new electric vehicles by 2030.

To help speed commercialization, Hartung suggests carmakers could team a fuel cell with a plug-in hybrid architecture. Such vehicles could either refuel with hydrogen or recharge the battery as the infrastructure for each technology develops.

Bosch also will supply the electric drivetrain for Nikola Motor Co.’s fuel cell-powered heavy-duty truck (pictured) due in 2021. In addition, Bosch acquired a 4% stake in Ceres Power Holdings plc last year. Ceres is developing a solid oxide fuel cell that will serve as a stationary charging unit for next-generation EVs.